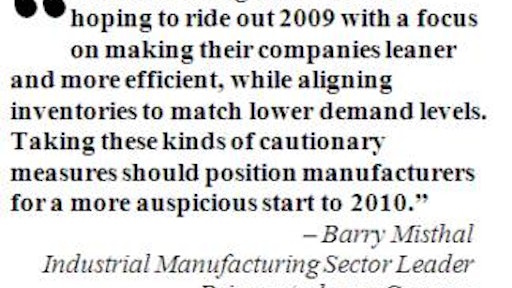 New York — May 6, 2009 — U.S.-based industrial manufacturers reported a slight uptick in economic optimism, with 16 percent of executives in a recent poll expressing optimism about the U.S. economy over the next 12 months, up 11 points from the previous quarter, according to PricewaterhouseCoopers.

More than half the respondents (55 percent) in PwC's first-quarter Manufacturing Barometer survey remain pessimistic about the U.S. economy, which is an improvement from the 70 percent who were pessimistic last quarter.

The expected contribution of international sales to total revenues over the next 12 months remained at 36 percent, which is on-pace with last year's findings (35 percent). But, overall revenues will be lower, based on the PwC survey.

"The wide-scale fears of declining international sales, as we reported in previous Manufacturing Barometers, were finally realized during the first quarter of 2009," said Barry Misthal, partner and industrial manufacturing sector leader at PricewaterhouseCoopers. "Manufacturing executives are hoping to ride out 2009 with a focus on making their companies leaner and more efficient, while aligning inventories to match lower demand levels. Taking these kinds of cautionary measures should position manufacturers for a more auspicious start to 2010."

As international prospects remain uncertain, plans for geographic expansion were severely reduced — indeed, only 13 percent of respondents cited such plans. A mere 15 percent of U.S. manufacturers are planning mergers and acquisition activity over the next year, and only 18 percent are planning to expand to new markets abroad.

Despite declining international sales and uncertainty about the domestic and global economies, 34 percent of manufacturers are expecting positive revenue growth for their own companies over the next 12 months, while 27 percent project negative growth. However, only 13 percent of manufacturers expect positive growth in 2009, and average revenue growth is expected to drop to an all-time low of minus 9.1 percent for the year.

The Barometer reports that manufacturers are scaling back plans for major new investments, with less than a quarter (24 percent) planning such expenditures over the next year, a sharp drop from the 52 percent reporting new investments a year ago. However, more than half (53 percent) are increasing operational spending in an attempt to stabilize their businesses, with the majority of manufacturers (29 percent) planning to focus on new product and/or service introductions.

In contrast, concern about oil/energy prices has plummeted to a low of 21 percent as commodity prices leveled off significantly during the past year. Also of note, competition from foreign markets was reported as the chief potential barrier to growth by 39 percent, up 14 points from last quarter, as international markets tighten.

On the workforce side, manufacturers are bracing for a tough year ahead, as more firms plan staff reductions over the next year. Forty-two percent plan to reduce their workforces, up 7 points from Q4 2008 and up 27 points from Q1 2008. However, layoffs will occur at a slower pace, as composite workforces are expected to be cut back by 1.8 percent, as opposed to the minus 3.2 percent cited in Q4 2008.

"Low demand forces the reduction of inventories, which means that manufacturers will be operating on a conservative basis through the summer months," explained Misthal. "However, manufacturing projects, and activity should resume in the fall, when new orders are typically placed. We believe we'll see a rebound in hiring plans, along with inventory replenishment in the coming year — assuming that demand picks back up by year-end 2009."

Views on the TARP Program

This quarter, the Barometer queried U.S. manufacturing senior executives about their views on the U.S. federal government's Troubled Asset Recovery Program (TARP). Responses show that the majority of manufacturers (78 percent) believe TARP will have a positive impact on businesses, but only over a longer period of time (70 percent). Just 10 percent believe that TARP has already been effective in bringing liquidity to the credit markets, and 36 percent believe it will become effective over the next six months.

In terms of their own companies, 60 percent of respondents do not believe that the government bailout/TARP program will benefit their own company within the next six to 12 months; only 16 percent believe it will be beneficial in the short term.

"Manufacturing executives' views on the TARP program provide further evidence that these firms are taking a long-term view about what business success will entail, and executives are carefully and strategically planning for the challenging year ahead," added Misthal.

PricewaterhouseCoopers' Manufacturing Barometer is a quarterly survey based on interviews with 62 senior executives of large, multinational U.S. industrial manufacturing companies about their current business performance, the state of the economy and their expectations for growth over the next 12 months. This survey summarizes the results for Q1 2009 and was conducted from January 17 through April 14.

The Manufacturing Barometer is one in a series of quarterly business outlook surveys from PricewaterhouseCoopers. The survey provides a view on the 12-month outlook for revenue growth, new investments, new hiring plans and emerging business barriers, among other trend lines. In addition to the business outlook, panelists for the survey also address special issues they face as the business climate changes.