North American market said to be weakest region, but also where industry likely to see biggest bounce back, according to Global Logistics Business Confidence Index 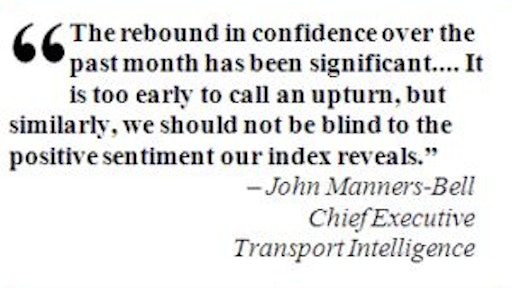 Brinkworth, UK — May 20, 2009 — The global logistics market has seen a significant return of optimism over the past few months, offering glimmers of hope to the hard-pressed sector, according to an industry index.

The latest edition of U.K. logistics market analyst firm Transport Intelligence's Global Logistics Business Confidence Index weakened slightly in April from +1.05 to -4.43, but there was far more positive sentiment about the future in the latest survey.

Overall the index assessing confidence in the state of the market in 12 months time moved from a score of -26 in February to +4 in April. This contrasts strongly with the results in February and March, when respondents expressed overwhelmingly negative expectations of the future, according to Transport Intelligence (Ti).

Ti polled logistics industry executives from key geographies, logistics segments and industry vertical sectors in April 2009. Respondents were asked to rate the strength of the market in which they were operating and how they felt the future would compare with existing market conditions.

Key findings of the survey include:

"The rebound in confidence over the past month has been significant," Manners-Bell said. "However, although industry executives are feeling more confident about the future, present market conditions continue to weaken, albeit slightly. It is too early to call an upturn, but similarly, we should not be blind to the positive sentiment our index reveals."