Manufacturing production will likely fall 12 percent in 2009, grow by 2 percent in 2010; severe decline will be followed by modest rebound, Alliance predicts 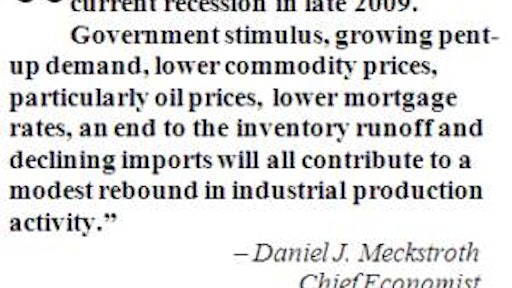 Arlington, VA — May 27, 2009 — U.S. manufacturing production continued to plummet in the first quarter of 2009 and the global contagion continues, but a confluence of factors portend a modest rebound in 2010, according to a new report from the Manufacturers Alliance/MAPI.

In its report, "U.S. Industrial Outlook: The 'Great' Recession," which analyzes 27 major industries, MAPI forecasts manufacturing production to fall 12 percent in 2009 and grow 2 percent in 2010 on an annual basis.

"Unfortunately, there are no quick fixes," said Daniel J. Meckstroth, chief economist for the Manufacturers Alliance/MAPI and author of the analysis. "The deleveraging of the American consumer is ongoing and will continue for years. With heavy job loss, relatively low wage growth, tightened credit, falling housing prices and declining stock wealth, consumers are cutting spending for big-ticket and discretionary items in order to build up depleted saving reserves. Business spending for capital goods is also in full retreat."

There was a broad downturn in the 2009 first quarter figures for the various components of the manufacturing economy. Only two of the 27 industries tracked in the report had inflation-adjusted new orders or production above the level of one year ago, five fewer than reported in fourth quarter 2008. One industry was flat, and 24 industries had production below the level of one year ago.

The report also offers economic forecasts for 24 of the 27 industries for 2009 and 2010. The recession in the manufacturing sector is expected to last much of this year, with MAPI forecasting only three of 24 industries to show gains: aerospace products and parts is predicted to grow by 5 percent, and communications equipment and medical equipment and supplies are each forecast to grow by 1 percent in 2009.

A turnaround is anticipated to begin in 2010, with 17 of 24 industries expected to expand, led by housing starts at a healthy 81 percent increase from this year's depressed levels. Motor vehicles and parts production is finally anticipated to ramp up, growing by 15 percent, in 2010 after an expected decline of 32 percent this year.

Five industries are expected to experience negative change in both 2009 and in 2010, with mining and oil and gas field machinery showing the most weakness. That industry is expected to decline by 20 percent in 2009 and by 14 percent in 2010.