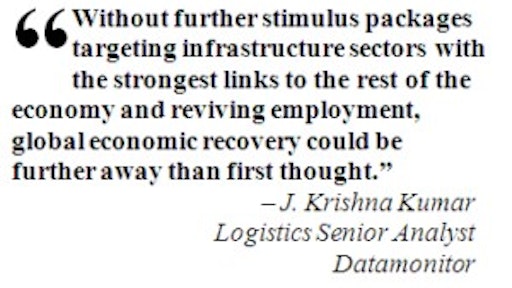 London — June 8, 2009 — Declines in the Baltic Dry Index (BDI), international air cargo volumes and forecasted decline in trade volumes by the World Trade Organization (WTO), along with those of weak crude oil demand until 2012 from the International Energy Agency (IEA), have raised questions over claims from some quarters of a quicker-than-expected global economic recovery, according to a logistics industry analyst.

J. Krishna Kumar, logistics senior analyst with the firm Datamonitor, says that despite the recent rally in the stock market brought on by these claims, these new announcements suggest that a full recovery is still a long way off.

Highlighting the continuing weak global demand for commodities, the BDI, an index tracking the cost of transporting commodities on international trade routes, fell by 9 percent for the week ending June 27, its biggest decline since the week ending April 3 this year.

In particular, demand for iron ore transporters slumped during this period. China, a major importer of iron ore has shown a decline of 6.2 percent in its imports in May. The BDI is a key indicator of future business activity, as it tracks the movement of basic raw materials like iron-ore and coal.

There was a recent surge in imports of industrial metals into the country, which has come on the back of both a large government stimulus package and importers taking advantage of low prices to increase their stock. However, the BDI is likely to decline further as this current surge in China slows, thereby unveiling the real nature of the recovery.

The international air cargo industry has also shown no signs of improvement, as year-on-year volumes fell 17.4 percent in May. Although this is a growth of 3 percent over April's volumes, the higher level of inventories will slow the pace of recovery, says Kumar.

"Since the airline industry can only absorb losses for so long, the prospect of rising transport prices after capacity rationalization could potentially dampen any hopes of a faster economic recovery," he said.

Last week, the WTO predicted a 14 percent decline in the trading volumes of developed economies, while it expected a 7 percent decline for developing economies amidst fears of higher barriers to trade.

These higher barriers to trade could actually dampen the pace of recovery by denying the accessibility of citizens to the most competitive products. In a world where global trade is driving global economic growth, Kumar observed, it becomes imperative to facilitate the free movement of goods and services.

Casting further doubt on the prospects of a quick recovery from recession is the forecast from the IEA, which states that the consumption of crude oil will not return to 2008 levels until 2012. In a lower GDP scenario that assumes a growth of 3 percent in the global economy, the IEA forecasts that global oil demand may not reach the peak of 2008 again until 2014.

Typically, the transportation and energy sectors serve as good barometers to measure the future direction of the economy in general. For example, sectors such as shipping reflect future levels of production and demand for commodities. Therefore, the declines in the BDI and air cargo volumes cast doubt on the various claims of a faster global recovery than initially expected, Kumar said.

"A more likely scenario is that without further stimulus packages targeting infrastructure sectors with the strongest links to the rest of the economy and reviving employment, global economic recovery could be further away than first thought," Kumar said.