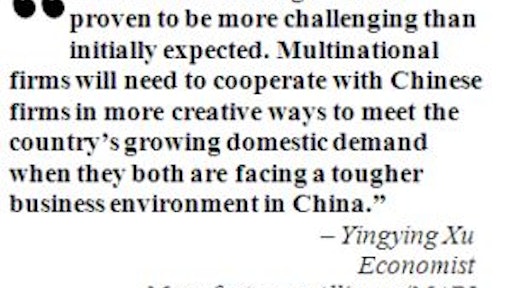 Arlington, VA — July 1, 2009 — With amazing consistency, China has expanded at an annual growth rate of 10 percent over the past three decades en route to its emergence as the second largest economy in the world. Only in recent years, however, has it become more obvious that China's industry-led, capital intensive growth model, with high savings and investment rates, comes at a price. This is of concern to trade deficit countries like the United States because their own growth in the future is increasingly tied to China and other emerging markets.

A Manufacturers Alliance/MAPI report, "China's Future Growth: Savings, Investment and Its Rebalancing Goal," argues that despite the Chinese government's efforts to stimulate consumption and constrain investment spending, the country's savings-investment gap has widened further and its trade surplus has continued expanding. As a result, domestic consumption in China is at historically low levels and imports into China remain too weak to help stimulate the global economy, or to help the United States correct its unsustainable trade deficit.

"China's real economy has been hit hard by the continued global turmoil and economic crisis, and there is much talk that China should use the crisis as a broad catalyst to accelerate the pace of reform," said Yingying Xu, MAPI economist and author of the report. "The progress of the transition, however, will not likely be fast and smooth. This is due to resistance from many vested interest groups who benefit from the old growth model and thus push for the status quo, as well as the complexity of tasks lying ahead."

It is widely agreed that a major driver behind China's rapid growth has been a significant increase in the rate of capital accumulation in the industrial sector. Investment, which averaged 36 percent of GDP in the 1980s, has exceeded 42 percent since 2003. Conversely, the contribution of domestic demand to economic growth has been declining steadily, with the share of household consumption in GDP dropping from more than 50 percent in the 1980s to only 35 percent in 2007, the lowest share of any major economy in the world. Commensurate with China's low consumption-to-GDP ratio is its high domestic savings, which outpaced investment growth and reached an unprecedented 50 percent of GDP in 2007.

China's top leaders formally called for a rebalancing of the country's growth sources in 2004, promoting more household consumption, spending on the social safety net and expansion of the service sector to grow the economy at a more sustainable and equitable pace. Despite these efforts, however, the trade surplus jumped from less than 3 percent in previous years to 5.6 percent of GDP in 2005 and to 9.4 percent in 2007.

One important step in the rebalancing of the economy regards China's currency. Xu writes that further appreciation of the renminbi (RMB), or yuan, will increase competition from imports and diminish export markets. This will reduce the growth of savings by stimulating household consumption, slow down domestic output growth, and help resolve the global imbalance problem, the report asserts.

"China's rebalancing road has proven to be more challenging than initially expected," Xu said, and she predicts a changing dynamic for business ventures. "Multinational firms will need to cooperate with Chinese firms in more creative ways to meet the country's growing domestic demand when they both are facing a tougher business environment in China."