As business cycle transitions from recession to recovery, signs of normalization — but not strength — return, according to MAPI Quarterly Global Growth Forecast 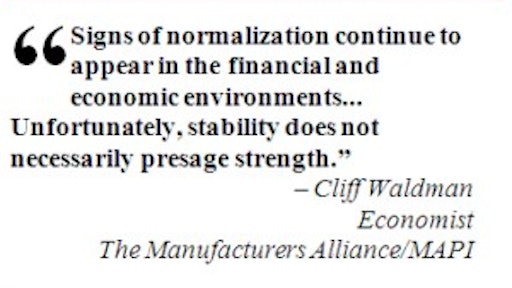 Arlington, VA — November 2, 2009 — Recent data paint an unmistakable picture that a global economic recovery is in progress, but the rebound could be unusually sluggish and disproportionately catalyzed by a number of select emerging market nations, notably China, India and Brazil, which were less affected than the industrialized countries by the global financial crisis, according to a new report from the Manufacturers Alliance/MAPI.

In the alliance's "Quarterly Forecast of U.S. Exports, Global Growth, and the Dollar: Fourth Quarter 2009 Through Fourth Quarter 2011," economist Cliff Waldmanwrites that "signs of normalization continue to appear in the financial and economic environments," and that the foundations for a renewed period of global growth are increasingly evident as the world pivots from crisis to at least some semblance of stability.

"Unfortunately, stability does not necessarily presage strength," Waldman cautioned. Two factors in particular are likely to slow the pace of the recovery during the next few years, he added.

"First, the timing and impact of the withdrawal of historically accommodative monetary and fiscal policies is a tricky issue, as near-zero interest rate policies are unsustainable. Second, it would appear that the U.S. consumer has been financially shocked into a higher savings rate, a positive development for long-run global stability, but one that saps a key source of U.S. and global strength just when it is needed to help pull the world economy out of an especially difficult period."

A falling dollar and only modest global growth tempers MAPI's exports forecast. MAPI anticipates the growth rate of total U.S. exports of goods and services will contract by 11.8 percent in 2009. This will be followed by 5.7 percent growth in 2010, with acceleration to 7.9 percent in 2011, a rebound tepid by the standards of recoveries from deep export contractions in the post-World War II period.

Most advanced economies are expected to experience marginal recoveries in gross domestic product (GDP) and in manufacturing output over the next two years. GDP in non-U.S. industrialized countries, which include Canada, the Eurozone (plus Denmark, the United Kingdom and Sweden) and Japan, is expected to rise incrementally from 1.9 percent growth during the first quarter of 2010 to an average of 2.6 percent growth in the second half of 2011.

Developing countries, as has been the case in recent decades, will likely grow at a faster pace. Aggregate developing country GDP is expected to increase by 3.5 percent during the first quarter of 2010, and then gradually reach a high of 5.0 percent growth during the third quarter of 2011 before moderating to 4.5 percent growth by the end of 2011.

MAPI forecasts the U.S. dollar, on a compound annual basis, will fall by 5 percent during the first half of 2010 against the currencies of major U.S. trading partners, and by 3 percent in each of the subsequent four quarters. A further decline of 2 percent is expected during each of the last two quarters of 2011.

"Export-oriented nations both in the industrialized and developing world are trying to rebalance the sources of their growth toward domestic demand," Waldman said. "This may usher in a period of greater currency stability and moderate declines in the dollar."

Kris Bledowski, MAPI economist, discusses the unusual characteristics of the Great Recession and sees signs of recovery in this video posted October 27, 2009.


Companies in this article