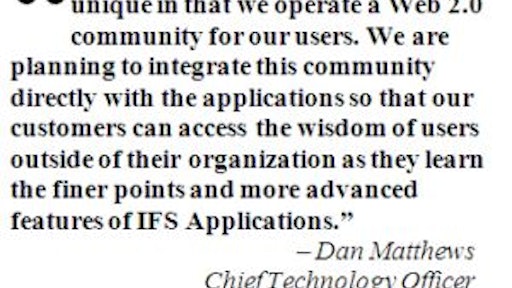 The study, conducted for IFS by a third-party research organization, found that while 40 percent of survey respondents said that ERP and social networking integration was extremely or very important, the vast majority indicated that they wanted their ERP system to help them perform functions typically associated with social networks and other Web-based collaboration tools.

A full 62 percent of respondents said they wanted their ERP system to "capture and record the knowledge of senior experienced engineers and professionals so that it becomes part of your corporate knowledge base." Among manufacturers with more than $1 billion in revenue, 72 percent said they wanted this capability.

"Enterprise 2.0 and social media tools are designed to draw information out of people, to get them to talk," said Rick Veague, chief technical officer at IFS North America. "This will become more of a business critical issue as the current generation of senior manufacturing operations and maintenance professionals prepares for retirement, only to be replaced by a smaller, less experienced but more technologically sophisticated generation."

Veague said that Web 2.0 tools like Wikis, threaded discussion boards and other features of social media will become common fixtures in enterprise software, including IFS Applications, as manufacturers and their solution providers adapt to the new reality of the leaner workforce.

According to IFS AB Chief Technology Officer Dan Matthews, IFS is taking seriously the challenges presented by the aging and shrinking workforce, and is introducing functionality to address these needs. IFS has already evolved IFS Applications in this direction with its new usability-enhanced interface, IFS Enterprise Explorer, which includes embedded search tools and innovative knowledge capture devices including "sticky notes," which allow users to informally add and edit comments to any record.

"We have been told that IFS is fairly unique in that we operate a Web 2.0 community for our users," Matthews said. "We are planning to integrate this community directly with the applications so that our customers can access the wisdom of users outside of their organization as they learn the finer points and more advanced features of IFS Applications."

Matthews said that IFS also is working to structure its embedded help information not as static documentation, but in the format of wikis, so that its customers can document their business processes and capture the knowledge of senior people in a format that has lasting enterprise value.

The study was based on a survey of more than 260 manufacturing software decision makers. An in-depth report of the findings is due to be available from IFS North America later this month.