With renewed optimism and strengthening balance sheets, IT execs see opportunities in security, healthcare, green IT and virtualization 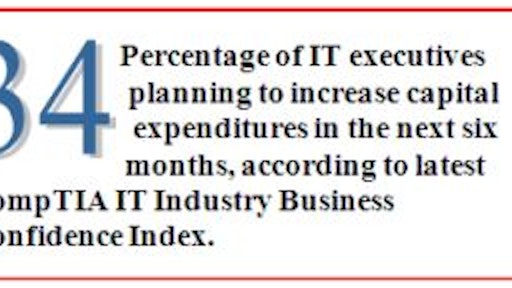 Oakbrook Terrace, IL — January 25, 2010 — The outlook for the IT sector is brightening as an industry confidence index registered its largest jump ever in December 2009, reflecting renewed optimism and strengthening balance sheets among information technology (IT) companies.

The CompTIA IT Industry Business Confidence Index jumped 6.3 points in December, to 56.6, marking the first time net positive opinions exceeded net negative opinions. The December results come on the heels of a relatively stagnant confidence reading for most of 2009.

Over the next six months IT industry executives expect further strengthening of the U.S. economy, the IT industry and their company, according to CompTIA. The group forecasts an additional 6.5 point increase in confidence, moving the rating into a solidly positive range on the 100-point scale.

"Many macroeconomic indicators have improved over the past six months, lending factual support to the positive perceptions of IT executives," said Tim Herbert, vice president of research at CompTIA. "Yet some big unknowns still loom, such as unemployment, the impact of public sector debt and the tight lending and credit market. Until these factors start to turn around, exuberance about an economic recovery will rightfully be tempered."

The impact on the IT industry will be evident as executives perform the delicate balancing act of investing in the future, through research and development and new business investments, while at the same time maintaining cutting costs, Herbert said.

IT industry executives predict the global IT spending growth rate will be in the 2-4 percent range in 2010, with the U.S. market trailing slightly. Executives are most bullish on IT services, which they predict will grow 2.5-5.5 percent in 2010. When asked about 2010 market opportunities, IT executives are most interested in:


CompTIA's IT Industry Business Confidence Index is an aggregation of three metrics: opinions of the U.S. economy, opinions of the IT industry and opinions of one's company. The survey was conducted in mid-December among a sample of more than 300 U.S.-based IT companies, including IT solution providers, value-added resellers, hardware and software firms and others.

The full report is available at no cost to CompTIA members at www.CompTIA.org.