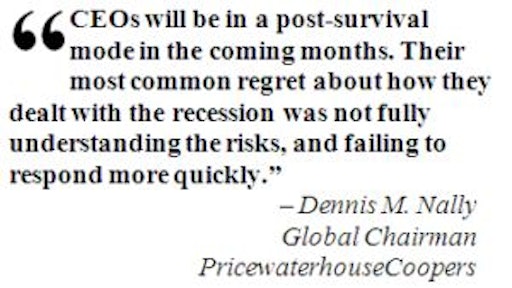 Davos, Switzerland — February 10, 2010 — With their worst fears of prolonged recession behind them, CEOs' confidence for future growth has bounced back from the gloomy prospects of a year ago, according to PricewaterhouseCoopers' 13th Annual Global CEO Survey.

This rising confidence has translated into a planned boost in recruitment, with nearly 40 percent of CEOs expecting to increase their headcount this year. That contrasts with 25 percent of CEOs planning job cuts over the next year, down from nearly half who decreased headcount in the past 12 months.

In Asia Pacific and Canada, about half of CEOs are looking to increase employment in 2010, and this figure leaps to over 60 percent in Brazil. Meanwhile, nearly a fifth of U.K. CEOs say they expect their headcount to rise by more than 8 percent in 2010.

Overall, the survey found that 81 percent of CEOs worldwide are confident of their prospects for the next 12 months, while only 18 percent said they remained pessimistic. The results compare with 64 percent who said they were confident a year ago and 35 percent who were pessimistic. Thirty-one percent of CEOs said they were now "very confident" of their short-term prospects, up 10 percentage points from last year, a low point in CEO confidence since PwC began its tracking. The survey results were released at the recent World Economic Forum annual meeting in Davos.

The survey revealed striking differences in confidence levels — and by extension the impact of the global recession — among CEOs in emerging economies and those in developed nations. In North America and Western Europe, for example, about 80 percent of CEOs said they were confident of growth in the next year. That compared with 91 percent in Latin America and in China/Hong Kong, and 97 percent in India.

Looking at the longer term, the results were more even. Overall, more than 90 percent of CEOs expressed confidence in growth over the next three years. Those results, coming at the start of a new decade, were about on par with confidence levels of CEOs in PwC's 2000 survey. But 10 years ago the economic split was very different, with 42 percent of North American CEOs extremely optimistic — twice as many as in Asia.

For the future, a total of 60 percent of CEOs said they expect recovery in their national economies only in second half of 2010 or later, while 13 percent said recovery was already underway, and 21 percent said it would set in during the first half of this year. Return to growth was fastest in China, where 67 percent of CEOs said recovery had begun in 2009. However, nearly two-thirds of CEOs in the U.S. and more than 70 percent in Western Europe said the turnaround would not begin until the second half of 2010.

"The fears of a global economic meltdown have receded and CEOs are more upbeat about their prospects," said Dennis M. Nally, global chairman of PricewaterhouseCoopers. "CEO confidence is tempered, however, by the slow pace of recovery and the impact of often drastic cost-cutting and other steps taken to survive the downturn. The emerging economies are clearly recovering at a faster pace than those that are more developed. Companies with the best prospects for early recovery are those who managed through the recession while keeping an eye to the recovery ahead."

Nally added that the timing of the recovery will vary depending on geography and industry. "In some fast-growing economies the turnaround is well under way; but CEOs in the countries hardest hit by the crisis see its effects remaining through 2010 and beyond. CEOs must now shift their mindset to making strategic decisions about investing in growth in order to gain competitive advantage."

Other key findings of the survey:

Fears for the future: Protracted global recession remains the biggest overall concern of CEOs around the world (65 percent), followed closely by fear of over-regulation (60 percent). More CEOs are "extremely concerned" about over-regulation (27 percent) than any other threat to business growth. Other high-ranking potential business threats included instability in capital markets and exchange rate volatility. At the other end of the spectrum, concerns over terrorism and infrastructure were cited by less than a third of CEOs globally as threats to growth.

Love-hate relationship with regulators: CEOs were very clear about the threat of over-regulation. Over two-thirds of CEOs disagreed with the notion that governments have reduced the overall regulatory burden. At the same time, CEOs were optimistic about governments' efforts to address systemic risks such as another economic crisis — 65 percent of CEOs agreed that regulatory cooperation will help successfully mitigate systemic risks.

In addition, nearly half of CEOs were positive towards government taking an ownership role in times of crisis, including those in North America, whose dissatisfaction with most issues involving government measures to improve business conditions was evident elsewhere in the survey. Not surprisingly, CEOs from two sectors that received considerable government support during the crisis — automakers and banks — were amongst the most appreciative of government ownership in troubled times.

Combating the effects of recession: To combat recession, nearly 90 percent of all CEOs said their companies had initiated cost-cutting measures in the past 12 months, led by those in the U.S., Western Europe and the U.K. And nearly 80 percent overall said they would seek cost cuts over the next three years.

Public trust and consumer behavior: Over one-in-four CEOs believe their industry's reputation has been tarnished by the downturn. However, 61 percent of CEOs in the banking and capital markets sector said there has been a fall in trust in their industry.

Nearly half of CEOs are concerned that the recession caused a permanent shift in consumer behavior. Most say that consumers will place greater importance on a company's social reputation (64 percent), spend less and save more (63 percent), or be more active in product development (60 percent).

Risk management: Risk management took on greater importance among CEOs as a result of the recession. Forty-one percent of CEOs plan to make major changes to their company's approach to managing risk, and another 43 percent report plans to make some change to their processes. In addition, boards of directors are becoming more engaged in key aspects of management; such as assessing strategic risk, monitoring financial health, and overseeing company strategy.

"CEOs will be in a post-survival mode in the coming months. Their most common regret about how they dealt with the recession was not fully understanding the risks, and failing to respond more quickly," said Nally. "The importance of managing risk was the most often cited lesson to emerge from the financial crisis. CEOs are learning to balance risk management with decisiveness and flexibility as they seek to return to prosperity."

For the PricewaterhouseCoopers 13th Annual Global CEO Survey, 1,198 interviews with CEOs were conducted in 52 countries during the last quarter of 2009. The majority of interviews were conducted by telephone. The full survey report plus supporting graphics can be downloaded at www.pwc.com/ceosurvey.