After rough ride in 2009, region should show modest recovery in 2010 and in 2011, Manufacturers Alliance/MAPI report suggests 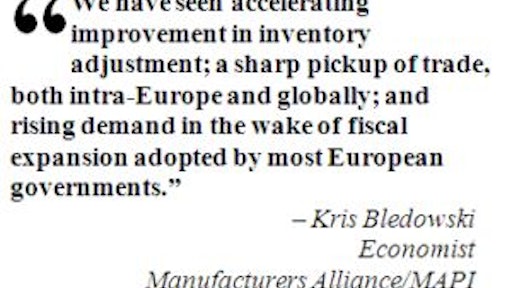 Arlington, VA — February 4, 2010 — Like its counterparts in Asia and the United States, the European manufacturing sector was hard hit by the global recession in 2009, but prospects are improving for a modest recovery in 2010 and in 2011, according to the semiannual Manufacturers Alliance/MAPI "European Industrial Outlook: 2009-2010," a report that analyzes 14 major industries.

The report separately analyzes two distinct regions: Western Europe and Central Europe. The former generally comprises the 16 countries that form the currency union (Eurozone), while the latter includes the three largest economies of Central and Eastern Europe (CEE3): the Czech Republic, Hungary and Poland. All forecasts are based on a proprietary MAPI model.

Kris Bledowski, Manufacturers Alliance/MAPI economist and report author, writes that preliminary data indicate that the European economy emerged from recession during the second half of 2009, but improvement in the industrial sector lagged. Coming out of contraction, Bledowski expects the industrial sectors of the Eurozone, Central Europe and the CEE3 all to grow roughly in the 2 percent to 2.5 percent range in 2010.

"We have seen accelerating improvement in inventory adjustment; a sharp pickup of trade, both intra-Europe and globally; and rising demand in the wake of fiscal expansion adopted by most European governments," he said. "The improvement in the industrial sector, however, is far less pronounced. Manufacturing production did indeed start climbing last summer, albeit hesitatingly, but great variations remain."

In the Eurozone, the report envisions a more positive outlook in 2010, with 13 of 14 industries showing growth, led by motor vehicles at 8 percent. Thirteen industries are also anticipated to grow in 2011, with computers and electronics the pacesetter at 14.5 percent. Textiles is the lone industry expected to decline in both years, by 7.8 percent in 2010 and by 3.4 percent in 2011.

"The pace of manufacturing recovery in developed Europe will underperform its American counterpart in both 2010 and 2011," Bledowski said. "European businesses will be hemmed in by cautious consumers and face lingering financing constraints."

Cam Mackey, council director at the Manufacturers Alliance/MAPI, discusses a few survey findings concerning the business environment many manufacturers are facing and how they are responding, in this video posted my MAPImedia on February 2, 2010.