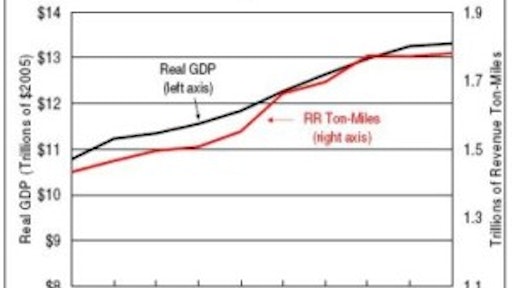 Washington, DC — March 2, 2010 — U.S. freight railroads are at a critical point in their history as the industry is facing new challenges from over-burdensome federal regulatory mandates that could seriously undercut the industry's ability to aid in U.S. economic recovery.

That was the message put forth by Edward R. Hamberger, president and CEO of the Association of American Railroads, speaking at a recent press briefing marking the release of a report titled "Great Expectations: Railroads and U.S. Economic Recovery." Hamberger said that while freight railroads have been able to weather the economic downturn, they stand to face even more difficult times.

"Freight rail is the only mode of transportation that is almost entirely self sustaining," Hamberger said, noting that as the recession continued through 2009, freight railroads invested approximately $9 billion upgrading and modernizing the nation's rail network. "We sustain a healthy national rail system with private capital, and we also deliver tremendous public, economic and job benefits to American businesses and consumers."

"Great Expectations: Railroads and U.S. Economic Recovery" is an AAR analysis report that examines the freight railroad industry's contribution to the U.S. economy. The report includes statistical data on the industry's progress throughout the economic downturn. It also provides an analysis of key policy initiatives in Washington, their potential impact on the industry, and possible solutions.

According to the report, freight railroads generate nearly $265 billion in total annual economic activity, and directly or indirectly support more than 1.2 million U.S. jobs. Every one freight rail job supports another 4.5 jobs elsewhere in the economy, the report said.

"Railroads face new policy initiatives that could hamper our ability to meet the great expectations America now has for rail to aid in our economic recovery," Hamberger said. "Select legislative and regulatory proposals are creating an air of uncertainty at a time when there is already too much of that. When so much is riding on freight rail's ability to sustain a healthy national rail network necessary to help America through to economic recovery, now is not the time to undermine our financial viability."

Hamberger pointed out that costly federal mandates and regulations could have a direct and negative impact on businesses and consumers in the form of higher costs for goods and services.

In particular, the AAR report suggests that the railroads are facing billion of dollars in new costs to meet regulations enacted over the past five years. For example, the 2008 Rail Safety Improvement Act mandates the installation of a safety technology called positive train control (PTC) systems on certain tracks. The Federal Railroad Administration (FRA) has estimated the cost of the PTC upgrades to be $10 billion to $14 billion over 20 years.

Other "unfunded mandates" imposed on the freight industry in the last five years include those related to emissions and a variety of safety, training, certification and other requirements, according to the AAR.

"What's more," Hamberger continued, "policies that weaken the industry's ability to attract investors could threaten high-paying American jobs with freight rail companies, as well as those jobs connected to the railroads in areas such as housing, manufacturing, retail and agribusiness."