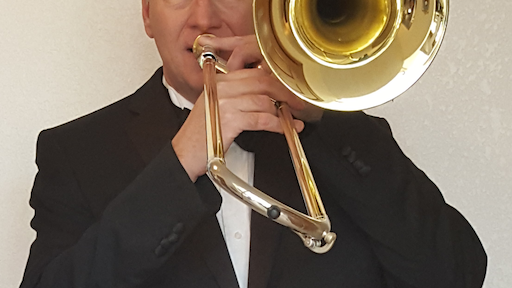 Hank Canitz learned to play trombone when he was 10 years old.

“It was expected,” says the product marketing director of Logility, a manufacturer of supply chain software.

Canitz picked the trombone, following in the footsteps of his father, who played the trombone professionally in Milwaukee and Chicago’s swing jazz bands of the 40s and early 50s, before settling in to family life and a career as a band director for the West Allis-Milwaukee School District.

The pace picked up in high school when Canitz became one of five trombone players in the state to make the Wisconsin Honors Jazz Ensemble in high school then earned a full scholarship to pursue a degree in jazz from the University of Wisconsin-Green Bay. But though the tempo was set for him to play professionally, he ultimately followed the beat of a different drum, and pursued a degree in engineering instead.

The teen, who regularly dined with jazz greats around the family dinner table just didn’t see himself playing the same song. “As an 18-year-old kid, I didn’t think I had the musical chops of a Rafael Mendez, [a famous trumpet player who played for President Lyndon Johnson and Egypt’s King Farouk], and I didn’t want to be a teacher, though my father influenced so many people in so many positive ways by doing that,” he says.

He instead marched into the world of science and math and pursued an engineering degree, but he never left his brass instrument behind. Canitz still practices seven to 10 hours a week, and slides his trombone in the Denver Concert Band as well as in the trombone choir, Too Many Trombones.

Though Canitz’ career is very technical, he explains his trombone playing still strikes a chord. “There is a strong relationship between music and mathematical skills,” he explains. “Music in its basic root form is really just a mathematical language.”

His early musical training aids him in writing whitepapers, blogs and articles for supply chain leaders. “My job is to be a supply chain thought leader,” he says. “Playing the trombone helps me take a creative look at different aspects of the supply chain, whether that be recruiting the right people for supply chain planning or trying to communicate in a way that’s easy to read and understand.”

And, though Canitz never took to the stage as a professional trombonist himself, he may soon see the dream come alive with his son, who plays both the trombone and the baritone. He will graduate this spring with a dual degree in classical music performance and biology, following the path his father forged first by pulling both the creative and the scientific side together.

Only 21% of survey respondents believe that they have a highly resilient network today – meaning that they have good visibility and the agility to shift sourcing, manufacturing and distribution activities around quickly.
Gartner Inc.
June 24, 2020
Follow Us