Modeling the Effects of Weather on Crop Price Volatility 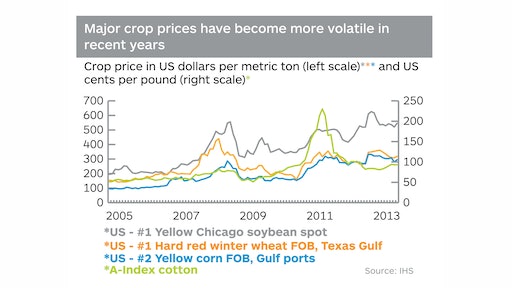 Many organizations struggle with price volatility and how to plan for its impacts on key crops and livestock in diverse regional markets. With this in mind, IHS’ Global Agriculture Team developed a 15-year scenario analysis quantifying the effects of weather and climate change on global agriculture markets by major product and region.

There were three key findings from the scenario:

The major crops most impacted under the scenario (as compared to baseline) were sunflower and rapeseed; their mean percentage price change from baseline over the forecast period registered 41.2 and 32.2 percent, respectively. In part, this reflects the fact that these crops are grown in a relative handful of northern countries, so their proximity to each other means they are more likely to be impacted by the same weather events.

The major crops least impacted under the scenario were generally those like rice and cotton—9.8 and 6.9 percent mean change from baseline, respectively—with high yields that continue to be grown largely in their traditional climatic zones.

For more information on this topic, visit ihs.com/Q13CropClimate.