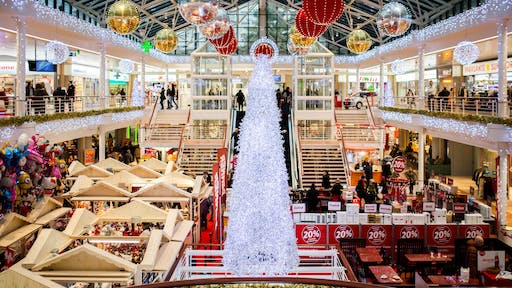 Amazon reported that shoppers ordered "hundreds of millions" of products between Thanksgiving and Monday, with customers purchasing more items around the world on Monday than any other day. CNN reports that shoppers ordered a record number of Amazon devices over the past four day, with The Echo Dot and Fire TV Stick 4K being some of the most popular items. In addition, more toys were purchased between Black Friday and Cyber Monday than ever before.

The company's fashion items also had its largest sales day, with a Carhartt beanie hat and a Champion hoodie being the most popular. In addition, Whole Foods, which is owned by Amazon, broke its record for turkeys being sold around Thanksgiving for the third year in a row.

According to Adobe Analytics, Cyber Monday brought in a total of $9.2 billion in sales, growing 17% over the last year. CNN reports that shopping on smartphones accounted for 33% of those sales, increasing 46% compared to last year.

Black Friday also grew 20% year over year and notched $7.4 billion in sales while Thanksgiving day sales ranked in at $4.2 billion.

Despite exclusive in-store deals, brick-and-mortar store sales dropped 6.2% compared to 2018, according to data from ShopperTrak. However, foot traffic increased 2.3% on Thanksgiving Day compared to last year.

Despite growth, the job market is still in the hands of applicants – proving that to remain attractive to prospects, organizations need to jump through hoops just to garner attention.
Cin7
May 11, 2022
Follow Us