The war between Amazon and Donald Trump continues as he looks at policy options for the e-commerce giant. 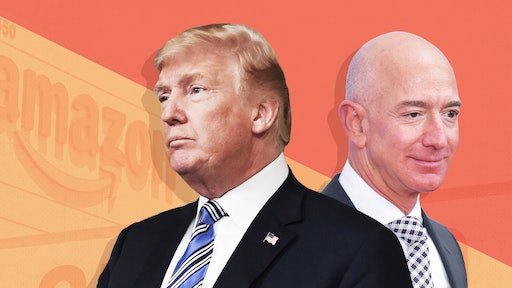 President Donald Trump said he would take a serious look at policies to address what he believes are the "unfair" business advantages of Amazon. Trump has turned to twitter to accuse Amazon of not operating on a level playing field and not paying taxes.

The Supreme Court will be addressing a ruling from 1992 that only companies with a physical presence in a state are required to collect the state's sales tax on purchases on April 17. South Dakota first asked justices to overturn the ruling and the Justice Department filed a brief in support, but lost in lower courts.

Even though Amazon is not involved in the case, if the ruling gets overturned they could face consequences. Amazon has already agreed to collect sales taxes in all 45 states that impose them on items it sells directly, however.

Trump's comments on Amazon followed a tweet earlier in the day calling the Washington Post the "chief lobbyist" for Amazon. The Washington Post is privated owned by amazon founder and chief executive officer Jeff Bezos. Amazon does not own the Post.