A recently released Softeon study on user perceptions of distribution center automation and software found that only 12.9% of companies are satisfied with their current levels of DC automation. 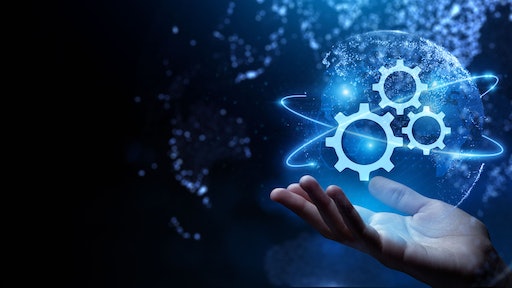 What’s holding companies back from the adoption of additional automation? Not surprisingly, the upfront cost of automation topped the list of barriers, scoring an average of 5.8 on a rating scale where 1 was the lowest barrier, and 7 was the highest. ROI concerns and lack of flexibility were the second and third-ranked barriers, respectively.

“Given the significant cost, labor and cycle time challenges shippers are currently facing, I am not surprised interest in DC automation is at such high levels,” said Dan Gilmore, chief marketing officer at Softeon, adding, “This study provides a unique and detailed view of how companies are thinking about the options, both in hardware and software.”

Effective governance structures, roles and deployment approaches all help to ensure that RPA projects are carried out in a systematic way.
APQC
November 3, 2022

The ability to see and make use of the data has never been greater. The freight-forwarders who combine those tools with the best of their own strategic thinking will lead the way.
Chain.io
October 30, 2022

Automated tools, like digital twins, enable enterprises to deliver on increasing customer demands and beat their profit expectations, all while ensuring they are aligned with sustainability best practices.
PSC (ParkourSC)
October 27, 2022

How Manufacturers Can Improve Collaboration with Suppliers

Agility is the name of the game today and agility comes from having supply chain transparency that facilitates collaboration. As the world gets more complicated and interconnected, it’s these characteristics that will separate leaders from followers.
Kinaxis Inc.
October 19, 2022

How NFTs Can Be Integrated into Supply Chains

The implementation of NFTs, into supply chains at large, could enable warehouses, manufacturers and consumers to better understand and refine the product journey.
Unlock
October 17, 2022

The startups will receive curated mentorship, access to SAP technology and application programming interfaces (APIs) and exposure to SAP and Accenture customers to develop high-impact proofs of concept.
SAP
October 12, 2022

By reducing variability in documentation and clearance paperwork, those in the industry can better handle ever-changing macro trends.
Hyperscience
October 10, 2022