Women in the supply chain industry continue to look up at the glass ceiling as their men counter parts can earn as much as 29 percent more than they do for similar positions. 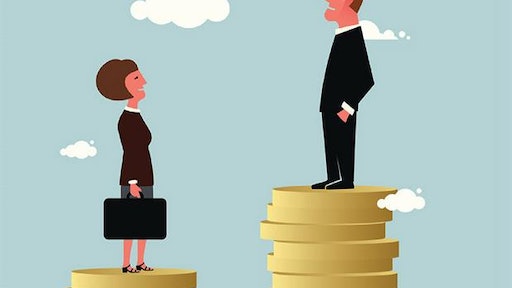 The Wall Street Journal reports that as more women make their way into the supply chain industry, they continue to face a gender pay gap. According to the publication, men get higher pay than women, even as they continue to climb in leadership ranks.

In a recent survey by Institute for Supply Management, it found that men earned 29 percent more than women in 2017, and the gap was even wider at higher up positions. Although there are fewer women working within the field, men who had 15-19 years of experience in the industry earned 48 percent more than their female counterparts, the Wall Street Journal reports.

Even though the pay gap has narrowed slightly since 2016, women were still paid less than men in the last year across various different supply chain jobs. According to the Wall Street Journal, most senior positions, such as executive vice president, saw men earning 26 percent more than women in similar positions.

Another survey, APICS, found that the overall pay gap was smaller, with men earning 16 percent more than women. However, Abe Eshkenazi, chief executive of supply chain organization APICS says that there's also limited opportunities for women to advance their careers as well.

The gender pay gap is visible across all labor force in the U.S. According to the Census Bureau, women only made 81.8 percent of what men were paid. In ISM's survey, it found that women in the supply-chain sector earned 81 cents for every dollar that a man made in 2017.

Overall, according the the Wall Street Journal, pay in the sector is up as companies are looking for ways to offset rising production and freight expenses.

Tackling the Gender Gap in Manufacturing and Supply Chain Management

Women in Supply Chain: Role Models for our Daughters

How Healthcare Supply Chain Operations Prepare for the Next Crisis

The pandemic presented many challenges for supply chain operations, but also taught valuable lessons to help ensure that systems are stronger in the future.
Intermountain Healthcare
August 28, 2021
Events

Two in three (66%) respondents from the talent community said they plan to look for new opportunity in the next 6 months.
DSJ Global
August 18, 2021

Actions speak louder than words. Kudos to companies that care and aren’t afraid to show it.
Marina Mayer
August 5, 2021

The SupplyChainLearningCenter.com offers courses from current partners with certifications ranging from procurement, planning and inventory management to logistics, transportation, distribution and supply chain management as a whole.
Marina Mayer
August 4, 2021

An increase in remote work caused by the pandemic was the largest driver of employee experience strategy.
WorkForce Software
August 3, 2021

LeadHERtrucking will utilize the mentoring structure to match women drivers new to the industry with experienced women leaders that have long-term, successful careers as drivers.
Women In Trucking Association
August 3, 2021

In order to attract the type of talent it requires for the future, manufacturing will need to sell itself to a new generation of job seekers who may alternatively gravitate toward a career in tech.
Deloitte Consulting LLP
July 29, 2021

A survey by Gartner showed that senior business executives in supply chain intensive industries believe that cost optimization is the main issue that chief supply chain officers (CSCO) should focus on in the future, followed by supply chain resilience.
Gartner Inc.
July 29, 2021

According to new research by Parsable, 18-24-year-olds believe that manufacturing is more important than what they thought it was.
Parsable, Inc.
July 29, 2021

Tapping into the large talent pool of available workers due to COVID-19 can help to address the skill gap challenges within the industry.
Ascentis
July 26, 2021

As stores begin to open back up across the country, retailers are asking for kindness from customers to help shorten the gab in the labor shortage and prevent supply chain disruptions.
Mackenna Moralez
July 16, 2021
Follow Us