The trajectory of Tifenn Dano Kwan’s career and her mastery of yoga is no coincidence, she insists. 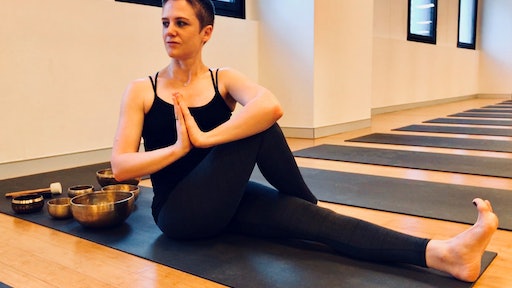 The trajectory of Tifenn Dano Kwan’s career and her mastery of yoga is no coincidence, she insists. Recently promoted to chief marketing officer at SAP Ariba, Kwan’s career with the company started shortly after she embraced the ancient art.

Kwan’s wife, who is a yoga instructor, first introduced her to the practice as an outlet for her Type A personality.

“I was so stressed, not loving myself so much. I looked good, but it doesn’t mean that I looked healthy,” she explains. “I hated yoga at first because I was an extreme sports girl. I needed the adrenaline to really keep going.” (Kwan still surfs, rides motorbikes and skis.)

But as it turns out, what Kwan really needed was self-love.

“When you’re doing yoga, it limits the modifications of the mind, so it’s like meditation. If you practice yoga on a regular basis, it actually calms the mind, so you stop thinking about everything and you start connecting with your true self,” she explains.

That inner connection has guided her well, and as Kwan progressed in the practice, she says she began to see the world differently. “I was much more grounded, mindful. And it had a complete impact on my life and my career.”

Shortly after completing a yoga teacher training class, Kwan’s whole world shifted, with a new job opportunity at SAP Ariba. “I literally got my new job just after I graduated as a teacher, and there’s no coincidences in life,” she adds.

Since joining SAP Ariba, Kwan has also carried the lessons she’s learned from yoga into the workplace. The biggest lessons learned she says are resiliency, kindness, self-love and, maybe most importantly, mindfulness.

Mindfulness is something Kwan has carried with her since day one. In her first big meeting after joining SAP Ariba, she kept very quiet, observing the body language and the dynamics of the room and speaking only when she was confident that it would add something. Afterwards her boss called her and told her they wished she would have spoken up more.

“I was mindful because I knew there were some challenges and I was the new kid on the block and hadn’t earned the right to speak up,” Kwan explains, adding about a month later, thanks to that early mindfulness, her department started seeing positive changes. She says she then finally was able to explain to her boss why she had been so reserved initially.

“I explained that I can be quiet and observe, and that’s the way I am; I’m quite mindful. And right now it’s paying off, and I’m asking you to trust me. She never again questioned my ability to get things done. And that’s because of mindfulness,” Kwan says.

“If you want to get things done, you don’t have to be anything else but yourself. You have to fundamentally believe in yourself even when the boss calls you out,” she adds.

As she has excelled in her career and taken on more responsibilities, becoming accountable for more people, Kwan says it has become increasingly important to listen. She credits yoga for this breakthrough.

“The collaboration and connection between people is the greatest asset you can have in a company, and it’s the absolute worst thing that can happen when it doesn’t happen well,” she notes. “When people don’t know how to collaborate, it’s really hard. Acquiring soft skills and having an ability to listen and emphasize with people and respect their point of view is really important."

Register
Hear from industry experts on best practices in hiring and training newcomers to the industry as well as upskilling veterans in the supply chain space.

The Role of Customer Service in Improving Supply Chain Management

Automation Will Improve Work, but Only if Upskilling Starts Now

Automation is only part of the transformation — technology alone is not the end all, be all. Your business still needs skilled human leaders and employees to drive innovation and growth.
Bizagi
April 2, 2021

Register
Marina Mayer sits down with select Supply Chain Professors to provide insight as to what companies should be doing in terms of hiring, training, re-training and upskilling supply chain professionals.

Nearly 59% of surveyed supply chain organizations reported having some form of objective to improve any dimension of DEI, and 23% of those organizations have formal target or goals included in management scorecards.
Gartner Inc.
March 31, 2021

Nearly 51.6% of respondents anticipate that their teams will hire moderately and for replacement roles in 2021.
Ethos BeathChapman
March 30, 2021

Assistant editor Mackenna Moralez talks with Ranna Rose, VP of operations & customer success, Resilinc about putting together a resilient supply chain team in the height of the pandemic.
Resilinc
March 29, 2021

When it comes to diversity and inclusion within the supply chain, there is still much needed improvements to be made.
Mackenna Moralez
March 26, 2021

Best Practices for Improving Driver Retention for the Long Haul

When drivers feel confident that they can expect to be paid on time, with easy, consistent access to loads and a community of other drivers to connect with, retention can improve exponentially.
NEXT Trucking
March 26, 2021

About one-fourth of the respondents agree Brexit will have an impact on hiring and flexible staffing needs in 2021.
Avetta
March 21, 2021

Marina, Brielle and Mackenna sit down with Food Logistics' 2021 Rock Stars of the Supply Chain to talk about the importance of quality leadership in the supply chain.
Brielle Jaekel
Marina Mayer
Mackenna Moralez
March 17, 2021