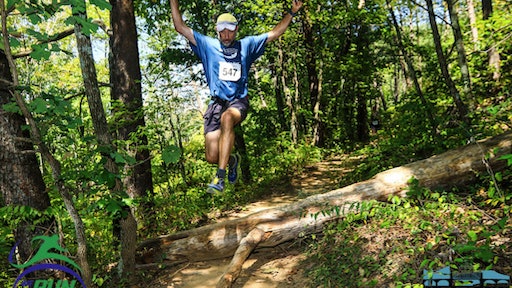 From an early age, Matt McLelland gravitated toward activities of the more unconventional type—something he has carried into adulthood and even passed on to his son.

When he’s not focused on his work in the Kenco Innovation Labs at Kenco Group, McLelland can be found jumping from a cliff, running along a wooded trail or maybe even swimming amongst sharks at the Tennessee Aquarium.

“Even when I was a teenager, I just didn't enjoy soccer, baseball, basketball and some of the traditional sports that kids my age did. I always wanted to go camping. I wanted to go hiking, and I wanted to visit national parks,” McLelland says. “My parents encouraged that from an early age, and it's always stuck with me. Now, when we go on vacations as a family, we'll go to places like Zion National Park or Teton National Park or Yellowstone.”

Most recently, McLelland and his son took a trip to Alaska, and a few summers back, his family visited Acadia National Park in Maine. Some people feel like a trip to Disney World is a rite of passage for every child, but McLelland’s son has never been. Instead of theme parks, his son instead experiences the great outdoors.

“If you were to ask my 11-year-old, ‘Would you rather go to Disney World, or would you rather go to Zion National Park again and hike the narrows,’ he would say, ‘Oh, Zion National Park, Dad.’ It's not because he knows that's what I want him to say. He really feels that way,” McLelland explains. “Between the wildlife and the outdoor things, I think that, like some people feel about Disney World, you shouldn't be able to graduate from childhood without having seen those things.

“We just love doing things where you can be outsides and enjoy the outdoors, specifically things where we can participate in activities,” he adds. “My wife, son and I all mountain bike whenever we can. My wife whitewater kayaks, as do I. We paddleboard together. We do vacations where we can actually take part in some of this stuff.”

One of McLelland’s favorite outdoor activities is hang gliding, which he has been doing for the last 16 years. Fittingly, he first become certified while living in Lookout Mountain, Tennessee, where one of the best hang gliding schools in the country resides. Ever since, McLelland says he has been “jumping off the side of a mountain in a really big kite many times a month.”

“(It’s) a fantastic hobby that requires a little bit of time, a whole lot of judgment and personal responsibility, and an understanding of the weather. I've never been the kind of guy that wants to play golf…or do things that people traditionally do, like play tennis or whatnot. I don't judge people that do things that are different from me, but I just can't imagine not doing some of the active things that I do. Hang gliding certainly falls into that category,” he adds.

Before starting a family, McLelland traveled a lot for work, which allowed him to hang glide all over the country. If he was staying in a place where there was hang gliding close by, he find a way to borrow or rent a kite and stay for the weekend instead of flying home. The most epic flight of his life, he says, was over Yosemite National Park.

Another active hobby McLelland participates in is trail running, which has been a passion of his for about 10 years.

“We live in an area where there are a lot of off-road places…I compete for fun, not for real serious competition, but compete on a regular basis in marathons, half marathons, 50Ks, typically nothing less than a 20-miler. The magic of it is I can do it right out my back door.”

McLelland lives about 15 minutes outside of Chattanooga, Tennessee, which besides being known as a supply chain hub, was named Outside Magazine’s “Best Town Ever” in 2011 and 2015.

“It's a lifestyle city for people that like doing things outdoors, which is sort of what I enjoy,” says McLelland. “It's just the perfect place for my company to have its headquarters and for me to live personally. I can't really imagine anywhere else in the country that allows us to do as many things as I enjoy doing than right here in Chattanooga.”

In addition to Chattanooga’s bustling outdoors scene, it also is home to the largest freshwater aquarium in the country, the Tennessee Aquarium, where McLelland has been a volunteer for the last 16 years. As a certified scuba diver, McLelland is able to participate in a variety of tasks, most notably in a program that allows volunteers to clean the inside of the shark tank.

“We clean algae and do all kinds of different tasks in there, so I get to dive twice a month in the Tennessee Aquarium,” he says. “It's probably the most selfish sort of volunteerism possible because, what they don't realize is, I'd probably pay them to do it. Being able to dive in crystal clear water with 78 species of fish is just amazing.”

An unconventional lifestyle and maybe even a less than traditional supply chain job keep McLelland motivated both personally and professionally. He believes loving your job is essential, but also that having a passion outside of work is equally important.

“You've got to have something you really look forward to, something you dream, fantasize about. It's important to love your job. I love my job, but I also love looking forward to events and activities on a calendar,” McLelland emphasizes. “It's important to me to have a race, a vacation, an activity, something to look forward to. It really motivates me to work hard during the week, because part of the success I have professionally drives what I'm able to do personally. If I'm really good at my job, it enables me to have the time off and the resources it takes to participate in these types of things.

“I find that working really hard during the day or during a week really makes that weekend activity that much more special. Like I really earned the right and the ability,” he adds. “There are a lot of things that motivate me professionally. Looking forward to these kinds of things on the weekend is just one of them.”