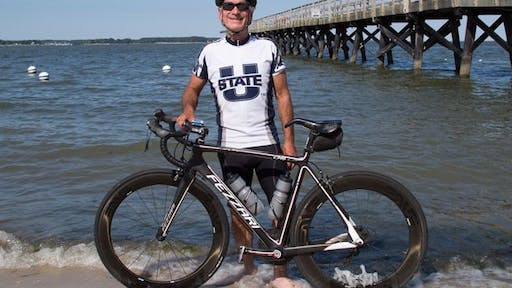 When Mike Glauser goes for a spin on his Fazzari performance bicycle, it is more than just a joyride. Bicycling means business to this committed cyclist, who spent 45 days shifting gears as he moved from entrepreneur and management professor to author in a 4,000-mile cross-country cycling expedition that taught him being in business is a lot like bicycling--you can always vary your speed, change your direction and control your destination.

The executive director of the Clark Center for Entrepreneurship began his journey long before any rubber met the road when an Oxford University study revealed that 47 percent of jobs across 702 occupations will become obsolete over the next decade.

Why? In a word, “automation,” says the 60-year-old businessman who has launched six companies over the span of his career. “Anything that can be automated, will be automated,” he says. In supply chain and logistics, this will become increasingly acute as delivery drones, e-commerce, robotics in manufacturing, and driverless vehicles become the norm rather than the exception.

“There will be great jobs for people in software engineering, hardware and app development, Big Data analytics and robotics, but those new jobs are not going to fully replace the ones lost in retailing, manufacturing and logistics,” he says. “More and more of us are going to have to produce our own positions … and take responsibility for creating our own livelihoods.”

Not only that, but the latest Gallup Engagement Survey showed that 70 percent U.S. workers do not like their jobs, nor are they engaged in their work. “They do it because they have to do it,” Glauser says. “Now, people are increasingly saying they are not going to do this anymore. The largest groups of entrepreneurs starting new companies are age 50 or more.”

With this knowledge in hand, the Utah State University business management professor decided to embark on a quest that combined his passion for pedaling and with his interest in career changes. The culmination of his efforts is the Main Street Project, which was designed to answer the question “How do I create a job?” and provide dissatisfied and displaced workers with a roadmap to entrepreneurial alternatives.

Glauser and three associates whizzed across America on the Trans America Trail, a bike trail that runs from Oregon to Virginia, to interview successful entrepreneurs in 100 small towns across the country and learn how they made a living by following their passions within the communities they loved.

He discovered that “just about anybody can start and build a business,” and that most entrepreneurs share a few key characteristics.  For example, not one of the business owners Glauser met mentioned money as the key motivator for launching their business. Rather, they set out to do something they enjoyed in a community they loved. They also built their businesses on something they really knew well. “They knew who the suppliers and manufacturers were, and already knew what worked and what didn’t because of their own use of the product,” he says.

These entrepreneurs also had a brain trust to turn to for advice, and were masters at maximizing resources. “Few of them had any funding,” Glauser says. “They had to quickly assemble a prototype, get out to market, sell it, and build the company with their cash flow.”

They also had multiple streams of revenue. One business, he discovered, designed biomass plants, but also built them and managed their operations. “This business had three different sources of revenue that complemented each other,” he says.

And, Main Street entrepreneurs believe in giving back. They donate to schools, teach classes, mentor other entrepreneurs, and use their resources to better the city. “This endeared them to the community. Citizens loved them and wanted to make sure they stuck around,” he says.

Glauser describes his findings as a return to a hundred years ago, before the American dream consisted of a climb up the corporate ladder. In the old days, he says, people found a niche in their communities and charted their own course to fill the gap.

Glauser shares the insights he uncovered while rolling across America in “Main Street Entrepreneur: Build Your Dream Company Doing What You Love Where You Live.”

He also offers others a single piece of unsolicited advance: “Life is short. Don’t wait to pursue a dream. Plan it into your life. It might be something you have to plan one to five years out, but make sure you do it.”