Amazon Considers Making Changes in How it Measures Space

Retailers are starting to move up in warehouse spaces, potentially moving to measure in cubic feet. 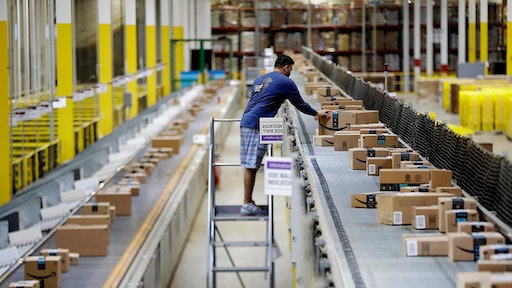 Fulfillment centers are starting to reach max capacity, and for e-commerce giant Amazon, not much is different.

In an earnings call last week, chief financial officer Brian Olsavsky said that the company could potentially start using cubic feet, instead of square footage, to measure its warehouse footprint. The change in measurement would give the company a clearer picture of how its fulfillment centers are becoming more efficient as inventory grows, CNBC reports. The company expects its warehouse footprint to grow 15 percent in 2018.

Additionally, the company is moving upwards in its fulfillment centers, filling up multi-story warehouses. CNBC reports that the use of warehouse space is no longer shown by length times width, but increasingly including height as well.

Moving to higher levels involve improvements for automation. Currently, Amazon warehouses have robots and machines handling greater amounts of work, while human employees act as guides. CNBC reports that the company spent $775 million on robotics company Kiva Systems in 2012 and has over 100,000 robots in its fulfillment centers.

By shifting to measuring in cubic footage, Amazon and other companies, can further utilize height within their centers as retailers continue to seek out storage space.