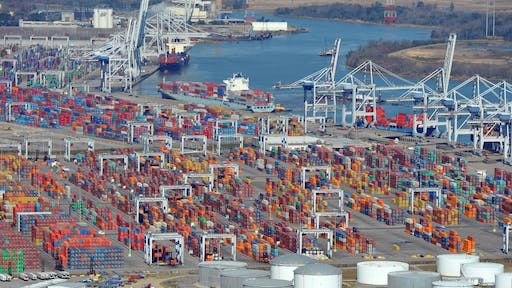 Xeneta crowd-sources data from more than 600 major international businesses, providing real-time information across over 12 million contracted rates, covering more than 60,000 port-to-port pairings. This gives the business a unique insight into a sector in which the only constant appears to be constant change.

“The container ship sector has been in a state of flux for some time,” comments Xeneta CEO Patrik Berglund. “And, unfortunately for its key players, the prospect of stability remains a distant speck on the horizon.

“Short-term rates have been rising on the main Far East Asian to North European port route, the world’s most important trade channel, since hitting lows in March. At that point, the market average price for a 40-foot container stood at $552, now it’s climbed to $1,172. On the face of it, this is a strong development for container ship companies, but the industry has been undermined by weak fundamentals for so long that it’s not quite that simple.”

Berglund points to structural problems within the segment, with 2016 beginning with severe overcapacity. In the last calendar year, some 208 new builds were introduced to a market already awash with a new breed of megaships, leading to an 8.1 percent oversupply of 20-foot equivalent units (TEUs). This, he opines, is effectively hamstringing businesses.

“There’s simply been too much space and not enough demand,” Berglund says. “European economies remain fragile, U.S. inventory levels are high and Chinese imports have receded as a result. The industry is trying to respond, with mergers, acquisitions and an increased number of void sailings, but is that enough to fix the underlying problems in the near future? I’d argue that it’s not.”

The Xeneta CEO points to the difficulties that even giant players are facing, with Moller-Maersk recently announcing a 90 percent fall in year-on-year net profit for Q2 2016. April to June figures saw the result stand at $101 million, short of the forecast $196 million and way below the previous year’s $1.069 billion.

“Carriers have still managed to lock in customers with long-term contracts, but at much-reduced levels,” Berglund states. “The market was so tough that they’ve been forced to accept such rates—the alternative is not moving the cargo. This has damaged revenues.”

“However, there is an adjustment as the market slowly trends upwards. Our feedback from shippers shows that they’re now struggling to negotiate market average prices from suppliers. This provides a strong indication that the upwards rate trend will continue and that container ship operators don’t want to get locked in to long-term contracts at the same low levels they’ve previously offered.”

Berglund believes the news of Hanjin’s bankruptcy adds yet another twist to the unpredictable container segment storyline.

“Competitors will now be battling for market share and scrambling to fill the holes created by the firm’s demise,” he suggests. “This should allow them to crank up prices. One additional possibility is an acquisition from one of the larger market players to consolidate market share. Watch this space.”

Berglund says the road to stability could be both long and bumpy. He believes setting prices on an exchange could provide a solution but, in the immediate future, businesses shipping containers need to use available Big Data to keep on top of ongoing market fluctuations.

“Software platforms, such as Xeneta, give shippers, freight forwarders and carriers the data they need to get the right price for their cargoes,” he concludes. “The idea of turning container shipping into a commodity, with fair prices set on an exchange is an interesting and, we believe, viable option. That would give everyone a stable platform to work from.

“Reliable, real-time data like ours could inform such an exchange. In the meantime, it’ll help businesses get the ammunition needed to make the right decisions and stay abreast of this most dynamic of shipping sectors.”

Are In-store Experiences Essential for Retailers this Holiday Season?

Major players are partnering up to offer experiential in-store opportunities such as shop-in-shops to hopefully improve foot traffic and focus on in-store strategies.
goTRG
November 26, 2021

From signs at every aisle and labels on each pallet and rack, there are endless ways in a warehouse to make a mistake or create a bottleneck. That’s why it’s important for operators to capture efficiencies whenever they can.
Peak Technologies, Inc.
November 26, 2021

Whether you are a supply chain executive, channel leader or contact center manager, at the end of the day, everyone working in retail is in the customer experience business.
Talkdesk
November 25, 2021

Walmart works on the launch of a drone delivery program through multi-site operations.
DroneUp
November 22, 2021

Global and U.S. Logistics is a Mess Heading into the Holiday Season

A number of CEOs are facing logistics challenges that impact both the top and bottom line, all sharing a number of common themes and strategies.
Azul Partners
November 21, 2021

How Location Intelligence Can Help Retailers Enhance Their Supply Chains

Location intelligence is a valuable tool that can help retailers enhance their supply chains during this holiday season and beyond.
Gravy Analytics
November 20, 2021

Autonomous Solutions for the Modern Warehouse

The path to warehouse automation allows everyone to move at their own pace and find the right technology to support their existing employees and business growth.
inVia Robotics
November 19, 2021

With the D2C, retailers can manage sales, view inventory, minimize costs and connect to sales channels all in one place.
Warehowz
November 18, 2021

C-Suite Leaders: Supply Chain Crisis Will Drag on for 3 Years

Nearly three-fifths (58%) of C-suite leaders believe the supply chain crisis will last more than a year — though one-third (33%) fear it could drag on for three years.
Accenture
November 18, 2021

From the Warehouse Floor, Things Can Only Go Up

The growing shift to sustainable solutions across the supply chain industry has become not only a wonderful trend, but a way to think outside the box when it comes to efficient eco-friendly processes.
Hannah Gooch
November 15, 2021

Nearly 53% of small business owners surveyed anticipate inventory shortages through the rest of 2021, while 48% of retailers say their stock will be anywhere from 20-50% lower than usual.
Digital.com
November 15, 2021

The Race to Automation and Visibility

Top companies are investing in adding innovative technologies to their systems to keep up with the uptick in e-commerce demand and perennial workforce shortages. Download part four of a 4-part series to read more!
November 15, 2021

How Warehouse Automation Solves Many of Today’s Supply Chain Challenges

While adopting advanced technology is often the solution, it can come with unexpected complexities.
Körber
November 15, 2021