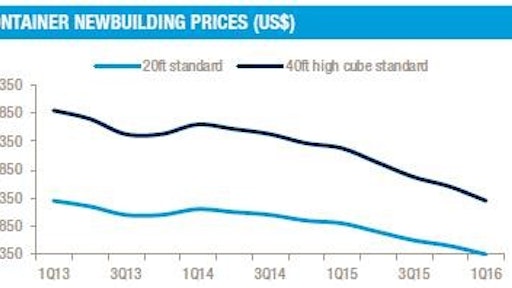 Prices for new dry freight containers declined to their lowest point since 2002 during first-quarter 2016 and are still going down, according to the latest edition of the Container Equipment Insight, published by global shipping consultancy Drewry.

Average container equipment prices fell 15 percent through the first quarter, as the deteriorating outlook for trade growth impacted pricing. As a consequence of this, and the fact that steel and other material costs are no longer in decline, Drewry estimates that the container manufacturing sector made a small net loss in the first quarter of 2016. Used dry freight container prices also declined further, to a level not seen in almost a decade.

“New box output slumped markedly this year, with leasing companies again showing a strong reluctance to buy,” said Andrew Foxcroft, Drewry’s lead analyst for the container equipment sector. “That suggests 2016 could prove to be the weakest year for box production since the collapse of 2009, with equipment increasingly in surplus. Central to the problem is the already sizable stockpile of new containers at factories in China, including substantial production from 2015 still awaiting collection.

The lessors’ inactivity can be further explained by the depressed state of rental rates, which dropped yet further during the first quarter. The average fell another 10 percent on its position late in 2015, having declined in line with prices. The slowdown suffered recently by the box lease industry largely stalled its previous strong rate of fleet expansion, which already resulted in lessors regaining much of the share (in ownership terms) lost during the preceding decade.