According to Tada's Coupon Matter study, while consumers aren’t inclined to look too hard for deals, discounts do drive more purchases 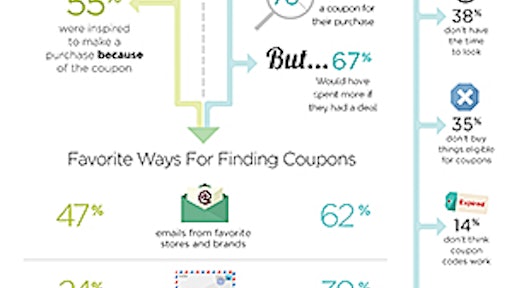 Los Angeles—Oct. 23, 2013—While couponing and discounting can soften a retailer’s bottom line, there’s no question that they can move merchandise, particularly when the promotions come directly from the brand/retailer. In a recent study of 8,858 online consumers, who were surveyed immediately post-transaction from 1,356 online stores, 54.47 percent of those who used a coupon during purchase (n=2,115) would not have made the purchase without the deal; in addition, 54.59 percent of these shoppers were inspired to shop because they received a coupon. Deal-laden newsletters and catalogs are driving sales from shoppers who are open to make impulse purchases.

The results of the study indicate that couponing is an effective mechanism for driving incremental sales, without materially turning full-price buyers into discount shoppers. Of those (n=5,148) who did not use a coupon for their purchase but claim to like using them, 75.95 percent admit that they did not bother to actually look for a deal. In the same breath, 66.79 percent of those buyers claim that they would have spent more had they had a discount in hand.

For shoppers who are pro-coupon (yes, there are buyers who claim to not like them), emails from their favorite stores and brands are their preferred way to access deals by a long shot. These pull in 46.77 percent of those who used a coupon during their transaction, and were cited as the go-to source by 62.36 percent of those who checked out without a coupon but profess to use discounts when available.

While 37.63 percent of all shoppers polled claimed that they can be compelled to shop any category without a coupon, 33.14 percent of respondents insisted that they would only buy apparel and accessories when there’s a coordinating deal. Meanwhile, 21.98 percent of shoppers hold out on electronics, 15.22 percent of buyers wait for discounts on computers and software, and 13.11 percent wouldn’t shell out on health and beauty without a deal. The two categories most coupon-proof are gifts and flowers (6.68 percent), and musical instruments (3.87 percent).

Despite the ease of accessing deals through coupon-aggregating sites and search, 19.34 percent of shoppers who didn’t use a coupon on their purchase (n=1,304) claim that “they do not ever use coupons,” citing a lack of time as the number one reason (38.33 percent) why they don’t look. Meanwhile, 34.63 percent claim that the things they want to buy are never eligible for deals, while 14.15 percent cite frustration that coupon codes never work.

Couponing generally does not shift full-price buyers into discount shoppers, but is effective at driving incremental and impulse purchases among shoppers who would not have otherwise shopped. Emails and catalogs are most effective at spurring these impulse purchases among deal-motivated buyers. However, a lack of a coupon doesn’t necessarily deter buyers either, as they often shop without even stopping to look for a discount. In short: If you put a coupon in front of customers, they would often act, but they generally wouldn’t go far out of their way to ensure a better deal.

Tada’s Coupon Matter Quarterly Report is a survey conducted by Tada, released to coincide with seasonal shopping trends. The reported results are considered the most accurate measurement of couponing behavior online. The report includes data reflecting coupon influence on purchasing trends, coupons as a mechanism for driving sales, and overall category insights. (Data from this study was collected from 8,858 online buyers from September 16-23, 2013 via Bizrate Insights). For more information, please visit www.tada.com.

By following the right steps procurement teams can help their organization can go from $0 to at least $250K a year in savings.
Valta Technology Group (Valtatech)
June 13, 2022
Follow Us