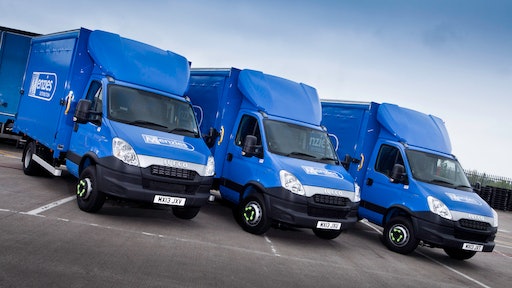 Devizes, United Kingdom—July 18, 2013—Newspaper and magazine wholesaler Menzies Distribution Ltd. updates half of its large goods vehicle (LGV) delivery fleet with 110 new vehicles on a five-year-contract hire deal with Ryder Europe (of Ryder System Inc.) The new Iveco trucks range in size from 26 tons to six-and-a-half tons. Menzies Distribution will receive the trucks in batches throughout 2013 and 2014.

“We look forward to a mutually beneficial strategic partnership with Ryder, which will involve the provision of and fleet management for over 120 vehicles in 2013 and 2014,” said Allan Hughes, Manager, Transport and Logistics, Menzies Distribution. “Ryder invested a great deal of time and effort into understanding our business and what is important to Menzies Distribution.”

Although some trucks will arrive after emission standard Euro 6 comes into effect next January, all will be Euro 5 compliant, due to a joint initiative between Ryder and Iveco to have the new vehicles registered by August 2013. An additional 16 vehicles, previously on long-term rental, will also be converted to a four-year contract hire agreement. This equipment comprises three 44-ton GVW tractor units and matching trailers; four 26-ton and six 18-ton trucks.

Menzies Distribution has a 240-strong LGV fleet along with 310 light commercial vehicles (LCVs) which help deliver more than five million newspapers and two million magazines every day, with some vehicles covering up to 75,000 miles annually. As a result of detailed consultation with Ryder, the entire new fleet will be equipped with market-leading telematics system, Microlise, to help Menzies Distribution monitor fuel consumption, driver performance and delivery schedules.

“We are delighted that Menzies Distribution has chosen Ryder as its partner for fleet renewal for the first time,” said Robin White, Sales and Marketing Director, Ryder. “The new fleet mix is the result of highly detailed consultation to ensure that the most appropriate vehicle sizes were selected to achieve the most efficient payloads, which is a complex undertaking in the heavy newsprint sector.