Hydrogen is being deployed in an increasingly wide swath of material handling applications, from fueling lift trucks in manufacturing facilities, to powering heavier-duty lift trucks and even container handling equipment at ports. 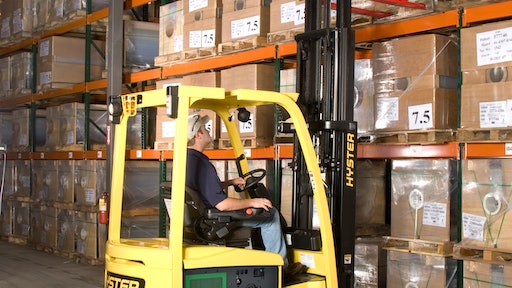 With supply chains accounting for more than 90% of most organizations’ greenhouse gas (GHG) emissions, they play an important role helping businesses and governments meet emissions reduction targets. But what can supply chain operations begin doing now to reduce their emissions?

The White House announced new actions earlier this year to support American manufacturing and reduce emissions in the industrial sector, in part through easier access to hydrogen.

Hydrogen is a clean fuel that, when consumed in a fuel cell, produces only water and heat as byproducts. In addition to producing zero emissions, hydrogen fuel cells possess other characteristics that make them an attractive option to power critical equipment in a broad range of supply chain applications. Hydrogen fuel cells offer simple, fast refueling and consistent power delivery until full depletion – the kind of sustained performance typically associated with internal combustion engines (ICE).

While hydrogen isn’t a fit for every operation, it is being deployed in an increasingly wide swath of material handling applications, from fueling lift trucks in manufacturing facilities, to powering heavier-duty lift trucks and even container handling equipment at ports. In Los Angeles, a laden container handler at the Port of Los Angeles is part of a pilot program testing the use of hydrogen fuel cells with the help of a grant from California Climate Investments (CCI). Electric and hydrogen-powered terminal tractors with automation-ready capabilities are also in development in North America. Hydrogen is powering an expanded set of applications elsewhere in the world too; in Hamburg, an agreement was recently signed to test hydrogen power on empty container handlers and terminal tractors as a key component of the “Clean Port and Logistics” program. Valencia is also testing a ReachStacker powered by fuel cells, which performs much like its diesel-powered counterparts.

Performance and productivity are key

From automotive and aerospace to textiles and more, intense industries depend on maximizing efficiency at every level to succeed in a competitive global marketplace. With profit margins for manufacturing often less than 10 cents on each dollar of revenue, the just-in-time system reflects the extreme cost consciousness of this and other like-minded industries. Processes are carefully tuned to maximize output while minimizing waste in the face of space constraints, labor challenges and cost pressures.

This lean philosophy extends to material handling equipment. Businesses depend on their fleets to power a variety of processes, from keeping components flowing to production lines, to moving containers at busy port terminals. How can they minimize material handling costs without compromising performance? In some cases, hydrogen can help play a role. To understand the considerations and benefits of hydrogen power more fully, let’s examine a hypothetical scenario that illustrates how the technology can enable a business to unlock greater productivity at lower cost.

Let’s take a packaging equipment manufacturer for example. Say it operates several locations across the country, each dedicated to producing different products for various industries, from injection molding equipment to bottling and sealing systems. For an assembly plant as large as 850,000 square feet running three shifts, seven days a week, a fleet of 100 lead-acid battery-powered lift trucks would be appropriate.

But what if this business were to depart from lead-acid, in favor of hydrogen fuel cells? How could hydrogen help them apply lean principles to their material handling, and what benefits could they expect?

A shift to hydrogen reduces downtime

Halfway through a shift, this manufacturer’s lead-acid battery-powered lift trucks would typically begin to experience lower drive and lift speeds due to battery power degradation. That signals operators to take their trucks to the battery storage area for a swap. Driving to that area, swapping a lead-acid battery and getting back to work can cost operators about 20 minutes, or even longer if they must wait while other trucks are swapping batteries. But that’s not all.

To charge lead-acid lift truck batteries, the facility depends on the local utility service. Problem is, occasional brownouts in the area can prevent batteries from charging, risking trucks and operators sitting idle. And during peak electricity demand, charging lift trucks can be subject to higher rates.

Say the manufacturer takes advantage of the fact that fuel cells fit easily into the standard battery box of existing trucks – a simple retrofit – to use hydrogen instead. Hydrogen fuel cells can refuel in as little as three to five minutes, enabling the plant’s lift truck operators to get back to work quickly – roughly 15 minutes faster than the 20 minutes required to change a lead-acid battery. No power degradation also means the trucks operate at full power until depletion, just like an ICE.

Of course, this is just one scenario, so how might the productivity gain stack up in other applications, such as those that traditionally rely on ICEs? Even for large equipment with big tanks, like container handlers, it may only take 15 minutes to fill an empty tank – enough for 8-10 hours of continuous run time. This means that hydrogen-powered units do not need to refuel as frequently as their battery electric counterparts need to recharge, nor do they spend nearly as much time parked at refueling stations.

What else can our hypothetical manufacturer reap from the shift from lead-acid to hydrogen? In general, powering equipment with hydrogen requires less infrastructure and space – and particularly precious indoor space – than relying solely on battery power.

Lead-acid batteries need a full 8 hours to charge and 8 hours to cool down before they can be used again, so operations often allocate 2-3 batteries for each lift truck to avoid productivity losses. Maintaining and storing so many batteries requires a significant amount of space – a designated area of 5,000 square-feet, in the case of our hypothetical manufacturer. Switching the entire fleet to fuel cells can completely eliminate the large battery charging and storage area, opening up space for profit-generating activity and expanded output, increasing revenue per square foot without adding on to the building. For them, switching to fuel cells would involve installing four hydrogen dispensers throughout the facility for convenient refueling, each the size of a standard gasoline pump.

Hydrogen fuel can be generated on-site or delivered to storage and fueling stations. In the latter scenario, while hydrogen storage requires physical space, it can be located outdoors, allowing valuable indoor space to be utilized for revenue-generating activities. The amount of hydrogen an operation uses is a critical factor to determine what method of hydrogen sourcing makes sense. For a single truck, using a bundle of hydrogen tanks is sufficient, but when consumption hits 200 kg per day, delivery with a tube trailer is appropriate. When consumption passes 800 kg per day, on-site generation starts to make more sense. Location can also dictate the economics of trucking in hydrogen, as on-site generation becomes increasingly attractive with greater delivery distance.

Looking to the future

The development of hydrogen infrastructure and hydrogen fuel cell-powered equipment is happening now. Not only are real-world deployments underway, but major companies are also joining forces to build a regional hydrogen network, such as the hydrogen clean port and logistics project in Hamburg, to produce and distribute hydrogen fuel at scale.

As your business considers how to reduce emissions, consult with an expert to understand whether hydrogen is the right long-term fit.

The Orderpicker features an elevated height of 456 inches that allows for increased rack storage access to 11% more pick slots.
The Raymond Corporation
October 31, 2022

QuickBot depalletizer – or QB, as it has been nicknamed – automates warehouse receiving operations with robots through easy installation and can be picking cases within a few hours.
Mujin
October 28, 2022

Supply chains have seen unprecedented volatility over the past few years, with the impact of Brexit, COVID-19 and now the war in Ukraine leading to delays and shortages with no easy solutions.
Toyota Material Handling U.S.A., Inc.
August 23, 2022

MODEX In Person Was Return to Normalcy We Needed

I couldn’t help but revel in the fact that there were no mandatory masks, no pre-screening tests, no questionnaires to fill out. It’s almost as though it started where MODEX 2020 left off.
Marina Mayer
April 12, 2022
Follow Us