Storage Space: Once Seen as a Luxury is Now a Necessity

Storage has always been a pressing concern for businesses, but never more so than in 2018. 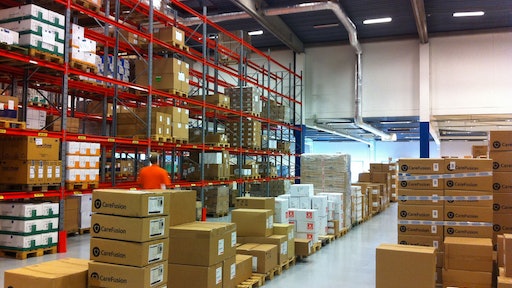 Storage has always been a pressing concern for businesses, but never more so than in 2018. Pressures, both globally and domestically, have ramped up the demand for storage, and sensible businesses are looking to optimise their existing spaces before they invest in moving or expanding elsewhere. Thankfully, there are numerous ways to do this, making business more efficient without disrupting day-to-day operations.

From the flourishing U.S. economy and e-commerce sector, to overpopulation and climate change, there are a myriad different factors driving the demand for warehouse storage. Here are just four reasons that explain why now is the perfect time to invest in upgrading and reorganizing your existing warehouse facilities and prepare for the coming ‘storage storm’.

As people around the world become healthier and live longer lives, populations have risen dramatically. There are 6 billion more people than there were just 100 years ago — and with more people the demand for products increases. Additionally, they also logically take up more space, which is already a precious commodity. On top of this, countries such as Japan and China are suffering from demographic crises, and are actually working to encourage higher birth rates.

An increase in demand for products seems like great news for businesses, as does the concentration of populations in large cities. However, the space for storing those items will be at a premium, and with competition likely to be fierce, businesses will have to use their existing storage space more intelligently.

As well as more traditional high density storage, delivery and retrieval methods will have to be adjusted. Amazon has already experimented with novel designs for delivery centers, including its famous patent for a tall ‘hive’ which delivery drones will fly in and out of. The democratization of this technology could allow smaller businesses to take control of their own logistics and allow them to better compete with Amazon in these dense, futuristic cityscapes.

If anyone was unaware of Amazon’s market dominance, recent headlines will have set them straight. The online shopping giant became only the second company in history to reach a trillion dollars in value, just weeks after Apple set the record. Having already owned online shopping and cloud computing, Amazon is now seeking to dominate grocery shopping, online video, drone delivery, livestreaming and much more.

One thing Amazon hasn’t been shy about is buying up warehouse space. In its drive to increase the scope of Prime delivery, Amazon has become the biggest warehouse operator in the United States, with a physical footprint of 254 million square feet. The company doubled its space last year alone, and is yet to build its new headquarters. The $5 billion project could bring as many as 50,000 jobs to the local area, and is a reflection of the business’ overwhelming strength, as well as its attractiveness to city authorities.

All of this is potentially bad news for businesses seeking to compete with Amazon. Storage space is already at a premium in many metropolitan areas, particularly in cities with ports, and those that qualify for one-day or same-day Amazon delivery. As Amazon grows and other competitors fight for dominance, this is only likely to get worse. Finding new space within your existing facility will be a must to avoid skyrocketing prices for rent and land elsewhere.

As businesses of all stripes seek to make menial labor more efficient, the potential of robots, drones and other areas of automation is being explored more thoroughly. Amazon seems to have become obsessed with the potential of robotics, with its patent for a drone ‘hive’, experiments with drone deliveries in England and Jeff Bezos’ posts about roombas. It seems like it’s only a matter of time until warehouses are almost entirely automated, with self-driving delivery vehicles and robots to store and retrieve every item automatically.

The stumbling block to this utopian future (or dystopia, depending on your view) is infrastructure. Roads will need to change to cater to self-driving cars, with reliable 4G or 5G connections everywhere. Air traffic control will need to extend to drones to prevent them from colliding with each other, or with the flight paths of other aircraft. Warehouses will need to be redesigned to cater to these new vehicles, with wireless base stations, shiny new IT infrastructure and plenty of room for efficient and safe traversal.

This isn’t all speculation -- many warehouses have begun to automate already. Robots can ferry large items around with the help of wireless communication and banks of sensors, helping to avoid collisions with human workers. QR codes and map data meanwhile can allow automated storage and retrieval systems (AS/RS) to fetch small goods from dense, narrow aisle racking, and bring them back to a human operator to be used or packed. Exploring and utilizing these technologies could allow you to get a leg up on the competition, and better compete with the big players.

We’ve discussed climate change above, and while arguments persist in the media, the scientific case is watertight. This hasn’t yet translated to consequential global action, however, and it’s currently predicted that the global climate, flora and fauna will all be severely affected over the coming decades. Should this come to pass, all aspects of modern life will have to be reconsidered and adapted to this changing landscape.

Storage is no exception, nor the logistics that support it. Seed storage banks in permafrost have already been threatened by flooding from melting ice and brewers of heat-sensitive beers are considering moves further north. Server farms are increasingly being built in arctic locations, but even these may have to relocate and reconsider their options. For your average cold storage, more energy will be required to keep the heat out, will will require an increased focus on renewables.

Less land may be available for warehouse storage, while transporting goods across distances is also likely to become more difficult, and require more intense refrigeration and protection against the elements. If this all sounds a bit scary, businesses may want to consider how their current storage space impacts on the environment. More efficient lighting, electric vehicles, better climate control, and maximizing the use of vertical space can all serve to improve your energy efficiency, and do that little but to make the planet a better place.

For over 25 years, Invicta Pallet Racking has been at the forefront of the archive storage industry throughout the UK and Europe, designing and installing some of the largest racking and storage systems currently found on the market.