There are plenty of ways to improve warehouse and worker safety with both trusted and new technologies. 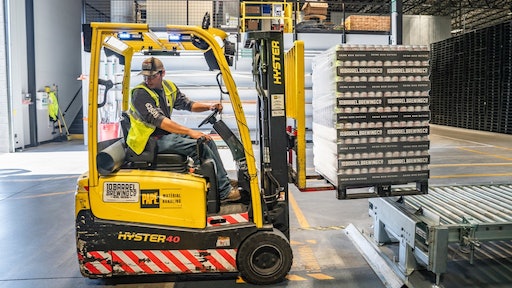 With the Coronavirus disease (COVID-19) pandemic ongoing, many facility managers and business leaders are more attuned to safety than ever. As people's focus is drawn to infection control, however, it is easy to neglect the basics of safety and create new hazards to contend with.

Thankfully, there are plenty of ways to rectify this with both trusted and new technologies. If you don't have any of the following safety measures in place, implementing them may make it easier to keep across all aspects of warehouse safety, and even day-to-day operations, more efficient.

While this might seem obvious, you'd be amazed how many warehouses haven't deployed this simple safety technology. End barriers are exactly what they sound like -- solid steel barriers at the end of aisles of racking. These barriers prevent forklifts from ramming into the racking and causing damage, a particular issue with units on the end of an aisle.

As this video ably demonstrates, this kind of damage can easily cause a domino effect, where one racking unit topples into another and can cause an entire warehouse worth of racking to collapse. With forklift collisions being the most common form of accident in warehouses, this is one of the easiest and most effective forms of passive protection you can employ in your space.

While physical guides are a sure-fire way to prevent forklift collisions, there are also more high-tech and less intrusive methods to achieve similar results. One of these is the use of proximity sensors on a forklift. Much like a modern passenger car, these emit an alarm to the driver as well as passersby when the vehicle is close to colliding with a person or object, allowing the driver to make adjustments to prevent a crash.

There are also other forms of automatic guidance systems. One example is the use of low-powered lasers to detect the forklift's proximity to objects, sounding an alarm or even automatically breaking or maneuvering to avoid collision. There are also line-guided forklifts, which automatically follow either a line on the floor or a wire and cannot deviate from them other than to pick up pallets.

A warehouse management system (WMS) is the bedrock of many businesses, but the way they are implemented and the type used can dramatically affect their scope. Some businesses may feel that a WMS isn't necessary given the scale of their operation, or the necessity to invest in and upgrade either systems to make best use of it. Yet while a WMS is primarily seen as a way to manage stock, it can also have a knock-on effect on efficiency and safety.

A new WMS can be used to control all manner of systems and sensors and integrate with a range of personal devices for warehouse staff. This not only allows you to locate and pick stock more efficiently, but also to send that same information to autonomous vehicles, allowing them to ferry around people or goods. By limiting the number of people in a warehouse, preventing vehicles from colliding and helping operatives to find and pick items more quickly, you'll reduce traffic and therefore the chance of collisions and damage.

Of course, you don't need an advanced system of computers and sensors to manage warehouse traffic more effectively. A number of simple solutions can be deployed and integrated without causing too much disruption or requiring substantial oversight. Instead, they should make it clear where and when people are meant to travel in a way that takes account of the unique dimensions of space and helps to avoid bottlenecks or collisions.

One element is a one-way system. This can be applied dynamically using a WMS and some form of traffic light system with lights or sensors indicating where aisles are occupied and when you can proceed. On the less technological end of the spectrum, simple floor markings such as arrows or designated pedestrian zones and crossings can help to zone traffic, directing the flow and keeping personnel separate from vehicles.

While fluorescent bulbs are more efficient than traditional ones, they are still far less efficient than LEDs. LED lights not only last longer, but also emit light in a more targeted way and along a narrower spectrum. This not only means that light is more effectively transmitted where it’s needed - illuminating the aisles and not the tops of racks - but also that less energy is wasted on bands of light that the human eye can’t even see.

A lack of proper lighting and abundance of shadows in a warehouse can create and accentuate hazards, preventing people from seeing what's around them and making them see things out of the corner of their eye that aren't actually there. The warm light of halogen bulbs can even cause drowsiness, as opposed to the clearer blue light of typical LED fixtures. LEDs are also less prone to failure and require less maintenance than fluorescent options and turn on instantly - all ensuring that you never lose coverage or the safety it provides.

The SWIFTI CRB 1300 is said to be up to five times more precise than any cobot in its class, making it ideal for tasks requiring consistent accuracy and repeatability.
ABB
December 14, 2022

How to Build a Shockproof Supply Chain Strategy

The ability to meet customer demands has never been more complex. Creating and maintaining a shockproof supply chain strategy can put your company in a position of strength for meeting any new headwinds.
Pure Storage
December 11, 2022