With the Paris Agreement promising further carbon emissions regulations, how can companies manage upstream emissions within the supply chain? 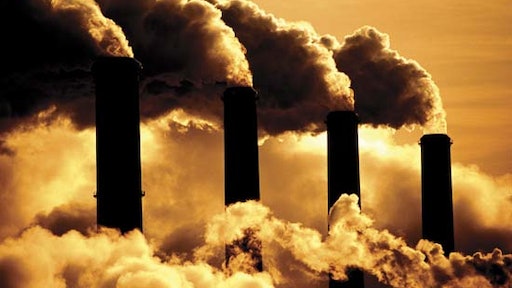 In December 2015, United Nations delegates turned the corner on how climate change should be addressed when they ratified the Paris Agreement. This landmark agreement shows world leaders are serious about ratcheting down carbon emissions. The next step is to establish regulatory mechanisms to drive down emissions and remain below a 2-degree Celsius increase in mean temperature.

But this measure, while good for the environment, represents real risk for companies that fail to tackle emissions within their supply chains. Yet many companies are not taking steps to manage upstream emissions.

According to Dexter Galvin, who heads the supply chain program at CDP (formerly the Carbon Disclosure Project), “Large companies effectively outsourced their emissions to their supply chains.” He explains that corporations stepped up their efforts to address climate change internally, but are doing little to impact carbon emissions in the supply chain.

“Many major global corporations realized the low-hanging fruits of energy efficiency. They achieved those quick wins and are now tackling the harder measures in internal energy efficiency,” Galvin says. “But few companies are actually engaging their suppliers in any meaningful way on climate change.”

He reports this sets off alarm bells for CDP. “For average manufacturers, four times their emissions actually exist in their supply chain. For retailers, up to 10 times their total emissions can be in the supply chain,” he says. “If companies are not doing anything to manage upstream emissions, it’s a huge risk.”

In 2008, CDP began requesting environmental information from suppliers on behalf of its 89 member organizations, which represent some of the largest companies and purchasers in the world. In 2016, more than 8,300 suppliers worldwide received CDP’s disclosure request.

“This ranking assesses the breadth and depth of a company’s engagement with their supply chains,” Galvin says. “As we developed this methodology, we thought it would be a powerful framework for companies to use to work out how to engage their suppliers in the first place.”

Existing supplier engagement levels are low—in CDP’s last supply chain report published in January 2016, just 25 percent of the responding companies had insight into what their suppliers were doing in regard to carbon emissions. “The member companies are doing great—they’re doing the work and are certainly leaders, but more companies need to start better managing the emissions in their supply chains,” says Galvin.

CDP’s study highlighted ignorance about carbon emissions within the supply chain. For instance, Galvin says, “Of the key suppliers [or the surveyed suppliers selected on the basis of spend], we had a 51 percent response rate, suggesting that the remaining 49 percent are not taking action, or do not have the insight or the expertise to take action.”

Those companies failing to take action commit themselves to potential risks down the line. “The world committed to a reduction target and we know regulations are coming, and with the vast majority of large corporations’ emissions actually in the supply chain, it’s increasingly foolhardy and unacceptable that more companies are not managing this issue in the supply chain,” Galvin adds.

He stresses the increased frequency and severity of extreme weather events is another reason why companies should take notice. In fact, 70 percent of the suppliers surveyed last year reported they believe their weather-related risks from climate change will increase, and 50 percent reported already seeing changes in precipitation and other weather patterns.

How to Lead the Way

Not every company is failing at the helm, however. Some forward-thinking corporations, like VF Corporation, are already addressing their emissions. This global leader in branded lifestyle apparel, footwear and accessories, with more than 30 brands including Wrangler, Timberland and North Face, discloses its carbon footprint to CDP annually.

“We measure our carbon emissions, Scope 1 and Scope 2, every year,” says Sean Cady, vice president of global responsible sourcing at VF Corporation. “Scope 1 is our direct emissions and Scope 2 is the emissions from the electricity we use.”

In 2011, VF Corporation set a target to reduce its overall carbon emissions by 5 percent by the end of 2015. It achieved a 12 percent reduction instead.

With this win under its belt, the company is committed to achieving the same results within its supply chain. The company aids its suppliers in building greater energy efficiencies into their factories and their logistics operations.

The results these companies have achieved can be emulated by others when organizations follow a few key steps. In CDP’s 2015-2016 supply chain report, “From Agreement to Action: Mobilizing Suppliers Toward a Climate-Resilient World,” BSR suggests companies adopt a three-step framework to improve climate resilience.

1) Identify supply chain priorities. These include areas of the supply chain with high Greenhouse Gas (GHG) emissions and high climate vulnerability. Key categories of spend and relevant operational geographies should be assessed. In order to identify priorities, it’s important for purchases to understand the types of suppliers that are likely to be less resilient. Special attention should be given to: Non-reporters and first-time reporters in CDP’s annual report, which are more likely to be less resilient than average suppliers; and to those suppliers with little or no management action in place, which are likely to be well behind others in reducing emissions and addressing climate risks.

2) Take action and develop targets. Purchasers should engage with suppliers to encourage action and develop targets for performance. Procurement actions should include requests for information. This data should be collected in a standardized way and adhere to GHG protocol standards. It should also include buyer financial incentives; supply chain engagement targets; requests for specific supplier management activities, such as board level responsibility; and collaboration to drive performance.

Galvin recommends using the knowledge gleaned from internal success to help suppliers take actions of their own. “It’s not enough to just implement it into your purchasing standards and procurement decisions. It also involves working with suppliers who are not looking at emissions, and helping them realize the low-hanging fruits of energy efficiency, for example,” says Galvin.

If a brokerage is looking to introduce much-needed digitization via the marketplace model, here are some fundamental best practices for a successful implementation.
Nautical Commerce
November 1, 2022
Follow Us