Mike Derge flocks to the sky as a canopy pilot (or skydiver) after a long, hard day’s work in the supply chain 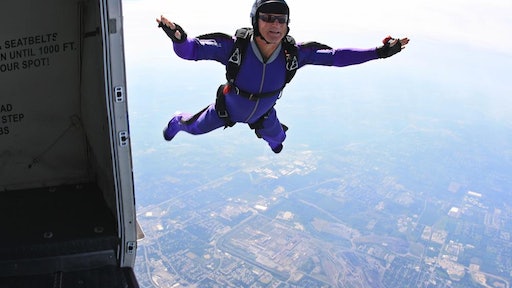 As the vice president of IT at West Chester Protective Gear—a protective gear provider for industrial, retail and welding markets—Mike Derge is very involved in the supply chain. But that doesn’t mean he doesn’t get out from behind the screen. While he takes his career seriously, being in charge of the company’s SAP enterprise-level solution, which handles the majority of its inbound and outbound supply chain, you could say he is winging it. That is, he skydives in his free time, admittedly being a bit of a thrill-seeker.

Derge did a tandem jump (which means he was harnessed to a licensed instructor) in college in 1978; his second jump was in 2012. All it took was seeing an ad for a drop zone opening up within proximity and he realized it was kismet to skydive again post-college. “For the last four years, I’ve been jumping actively almost every week. I accumulated over 530 jumps. I’m at a D license-level coach rating (one of the higher licenses you can get) and doing a lot of fun activities,” including formation skydiving, which consists of a group of skydivers connecting mid-free-fall to create stunning sky arrangements with their bodies.

While Derge started skydiving for the adrenaline rush, he continues to do so because of the people. “Skydivers are typically successful Type A people who are fun, outgoing, honest and trustworthy. You get the feeling they have your back, you have their back, and it’s very team-driven. It’s getting better, but I wish the supply chain was as team-driven and collaborative as skydiving is. You get so much more accomplished with teamwork, but it’s awfully hard. I have no way of artificially creating teamwork. It’s one of the more difficult parts of the supply chain.”

So, what’s it like? “The first five seconds is sensory overload,” according to Derge. “Your body kind of shuts down, but after that, you’re just conscious of floating in the air. I was a scuba instructor for about 15 years and enjoy floating in the water. When you’re in the water, you kind of feel like you’re flying, and when you’re flying, you kind of feel like you’re floating. It’s very relaxing once you get over that you’re plummeting to your death.”

Where Skydiving and Supply Chain Converge

“Skydiving involves paying attention to detail, as does my profession, because a simple oversight can cause a major mistake. [West Chester] participates in electronic data interchange (EDI) with many of our customers. A simple mistake can cost tens of thousands of dollars in a single day for noncompliance chargebacks from our customers,” which include the likes of The Home Depot, Lowe’s, Kmart and Walmart.

In both skydiving and IT, “You have to pay attention to detail and make sure it’s right 100 percent of the time,” he continues. “You can’t take anything for granted, and you have to check and double-check, and make sure that everything works exactly as it should. That’s very true in the IT part of the supply chain. A simple mistake in skydiving can have even worse effects.”