Do You Know How “Reshoring” Impacts your Supply Chain? 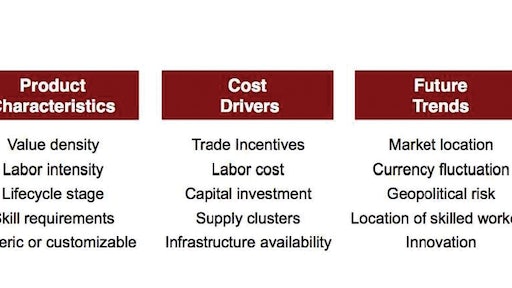 Businesses must weigh such factors as product characteristics, cost drivers and future trends to understand the potential impact that reshoring may have on their supply chains.

At an estimated $16.2 trillion GDP (2013), the U.S. is the world’s largest economy and home to some of the most advanced, innovative and productive companies globally. So why has the U.S. lost more than 25 percent of its high-tech manufacturing jobs to lower, labor-cost countries such as China, who currently sits at a comfortable No. 2 position?

There is no denying that the U.S. lost some competitive edge. There has been such a momentum around outsourcing and offshoring to these low-labor cost (LLC) countries—particularly Asia—that our loss became their gain. However, the combination of increasing consumer pressures on pricing—especially during a time of prolonged economic uncertainty—along with foreign country/regional incentives, tax rates and relaxed regulatory pressures alongside these low wages made these destinations an attractive option for some companies. It became exceptionally attractive when coupled with a growing Asia-based demand. We, however, do see some ‘shift in the tide’ as evidenced by some companies who decided to pull some manufacturing and move it back within region.

There are macro-level elements that will drive some companies to more fully consider the impact of their outsourcing and offshoring decisions. For example, China witnessed a tremendous rise in labor costs in the last few years supported by its burgeoning economy. Oil prices remain consistently high, adding pressure to the cost of transportation, along with some strained capacity for certain modal routes between Asia and their Western export markets. Asia has also unfortunately not been immune to its share of natural disasters, such as the floods in Thailand and the tsunami in Japan, which raised concerns among U.S. finished-goods manufacturers about their dependency on long supply chains. Even the economic fragility surrounding the Euro-crisis and its impact on the dollar can have impacts to company’s supply chain network design decisions.

There is no doubt that Asia will remain a strong and formidable manufacturing engine to serve the needs of American consumers. However, there is evidence that companies are more frequently doing an increased level of due diligence when considering their overall supply chain design. And in doing so, some companies are reversing previous decisions and are making a move towards “profitable proximity.” This simply means that companies further need to understand their entire cost-to-serve model to better determine if a more local option, e.g. near-shoring, might provide a more sustainable supply chain model that provides better economic, service and ecologically advantages to an Asia-based option. For higher-end, more value-added products with rapid innovation cycles, this could definitely be a better solution for some OEM’s.

According to an April 2012 survey of American manufacturing companies by the Boston Consulting Group (BCG), 37 percent of those with annual sales above $1 billion said they were planning or actively considering shifting production facilities from China to America. Of the very biggest firms, with sales above $10 billion, 48 percent came out as “reshorers.” Further evidence presented through a separate 2012 study by the Hackett Group reported that “offshoring of manufacturing is now rapidly moving towards equilibrium (zero net offshoring).”

In January 2013, Gartner reported that “the ‘one-size-fits-all’ approach to offshoring, near shoring and reshoring is simply misguided. Just as it was unwise to offshore manufacturing and product supply in the 1990’s and 2000’s, basing a decision to reshore or near shore based on a few examples being brandished around today would simply be foolish. Supply chain leaders of today need to look past the hype and zero in on the facts.”

So, is the trend evolutionary or revolutionary? Or not a trend at all but perhaps just a “correction?”

There are some factors that we absolutely must consider when constructing or redesigning a supply chain which ranges from product characteristics; to major cost drivers; to the future trend of some macrofactors (see illustration). In addition, we owe it to ourselves to continuously revisit the decision factors that might have a higher degree of volatility. These could include but are not limited to the following:

The starting point is to ask ourselves a few higher-level questions before we get into the lower-level data to judge even the need to re-examine decisions already taken:

Based on the above, additional key elements for review are:

The impacts of this shift go beyond the potential regaining of the loss of our competitive edge. The more fact-based and robust these decisions require of our supply chain teams—the more we must place emphasis on the processes, technologies and people skills to achieve this capability and turn it into a core competency that will offer a true competitive differentiation.

Douglas Kent is Global Vice President of Avnet Velocity (of Avnet Inc.), which serves as a liaison for the electronics industry and supports the supply chain functions of Avnet Electronics Marketing (EM) and Avnet Technology Solutions (TS).