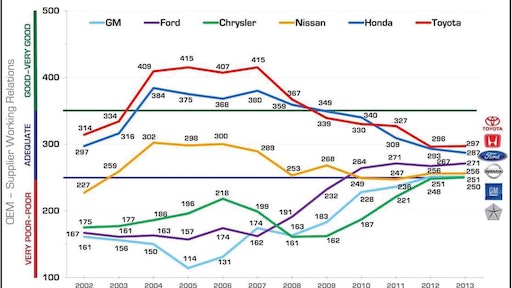 Confronted with greater demands than ever to make major investments in global facilities and in new technologies to achieve much higher corporate average fuel mileage goals, OEMs should be redoubling their efforts to develop more collaborative supplier relations in order to leverage their combined resources, according to Planning Perspectives Inc.

But according to the firm’s 2013 North American Automotive-Tier 1 Supplier Working Relations Index study, results showed no meaningful change since last year, except Honda, whose supplier relations continue to slowly drop. The annual study focuses primarily on General Motors, Ford, Chrysler, Toyota, Nissan and Honda because these six automakers comprise 77 percent of light vehicle sales in the U.S. The European 3 – VW, BMW and Mercedes-Benz – are reported separately.

“Given the challenges facing the automakers, to say this year’s results are disappointing would be an understatement,” said John W. Henke, Jr., Ph.D., President and Chief Executive Officer of Planning Perspectives Inc., Birmingham, Mich.

While still in first and second place respectively in this year’s overall Working Relations Index (WRI) rankings, Toyota’s score is virtually the same as last year with a gain of only one point, while Honda lost six points and continued its downward slide to its worst score since the study began. Ford remains comfortably in third place, followed by Nissan, neither of whom showed sustained improvement for four years. General Motors remained unchanged and in fifth place followed by Chrysler, who managed to pick up two points but remained in sixth place.

“It’s apparent that while the automakers’ top purchasing executives generally understand and support positive working relations, this support has not been translated into a consistent action plan for improvement,” said Henke. “The lack of improvement among these automakers’ purchasing areas over the past several years suggests that none of them has implemented a well-defined, focused plan to improve their supplier working relations. Or, if they have such a plan, it is not being implemented at the level of day-to-day contact with suppliers. Either way, this is not good for the OEMs or the suppliers.”

Historically, Toyota and Honda set the standard for the study. From 2004 to 2007 they performed well above the rest of the industry with overall WRI scores in the 350 to 415 point range.

Back then, the top-rated automaker, Toyota, scored 415 and the worst, GM, scored 114, with 301 points separating them. Since the recession in 2008, the two Japanese pace-setters have fallen dramatically to the 280 to 300 range, while the Detroit 3 improved to the 250 to 270 range. Today only 47 points separates Toyota at the top, from Chrysler at the bottom.

According to Henke, there are several reasons for Toyota’s and Honda’s fall and the current stagnation of the other OEMs:

Further, many suppliers provided anecdotal comments in the study in which they said that the Detroit 3 are slipping back into some of their pre-recession bad habits.

“They seem to have forgotten the help we gave them during the 2008-2009 recession because they’re back to their old tricks,” referenced one supplier in the study.

The annual study tracks supplier perceptions of working relations with their automaker customers in which they rank the OEMs across the six major purchasing areas broken down into 14 commodity areas. The six purchasing areas are powertrain; chassis; exterior; interior; electrical & electronics; and body-in-white.

The results of the study are used to calculate the WRI based on five key areas that contribute to collaborative supplier relations: OEM Help, OEM Hindrance, OEM-Supplier Relationship, OEM Communication and Supplier Profit Opportunity. These areas, in turn, are further broken down into 17 working relations variables. This year, 583 supplier personnel from 441 suppliers participated, representing 61 percent of the six automakers’ annual buy.

“Maintaining good supplier working relations is a never ending process; it’s dynamic, not static and requires continuous attention,” he said. “Purchasing management must make sure their Buyers understand poor supplier relations is costing the automaker money and is unacceptable.”

The costs to automakers of poor working relations are substantial, and will only increase going forward, Henke confirmed.

“We are in one of the most capital intensive periods the automotive industry has ever known,” he said. “New fuel economy standards, powertrains and fuels; global environmental requirements; global expansion; and increasing global competition are all placing enormous financial and human resource demands on automakers and their suppliers.”

“These pressures are further exacerbated by the large number of new product launches each OEM has in the pipeline for the next several years,” said Henke. “No automaker has the resources to go it alone, particularly when it is realized that each spends about 60 to 70 percent of its revenue on suppliers. If an automaker doesn’t work in a more collaborative manner with its suppliers, they’ll never realize the full competitive and financial benefits of good supplier relations, and at worst they’ll fail.”

Over the years, the study showed that automakers with Good-Very Good working relations realize considerable benefits. Their suppliers:

Whereas, automakers with poor relations:

In 2010, Planning Perspectives began studying the Big Three German automakers with manufacturing operations in North America: Volkswagen, Mercedes-Benz and BMW. Since 2010, BWM, after dropping for two years, improved this past year to lead all OEMs, including the Detroit 3 and the Japanese 3, with a WRI of 324.

Mercedes and Volkswagen continue to slide in the rankings with Mercedes now trailing Toyota with a WRI of 289 and VW trailing all OEMs with a WRI of 231. The WRI rankings for the two Volkswagen operations—VW-Puebla and VW-Chattanooga—are 241 and 216, a 25-point difference.

The increase at BMW resulted from a mix of changes, i.e., increases and decreases in rankings, across the WRI components. The BMW WRI increase came about because of improvements in the Hindrance and Communication components, which offset reductions in the Help, Relationship, and Profit Opportunity components.

The WRI decreases for Mercedes and VW have occurred because of reductions in the Help, Communication, Relationship, and Profit Opportunity components, which were greater than an increase in the Hindrance component.

If the Japanese 3, the Detroit 3 and European 3 were combined on a consolidated WRI graph as below, BMW would rank highest of the nine automakers and VW the lowest.

This report is provided by Planning Perspectives Inc.

The logistics industry could see a significant shakeup, as a Seattle congresswoman proposes a new legislation focused on antitrust that could force Amazon to sell off its logistics.
Brielle Jaekel
June 22, 2021

By opening their minds to more agile alternatives—both at the workplaces and along the supply chain—some are discovering a path to a more resilient, inventive future.
Protolabs
June 22, 2021

The shortages throughout the world that arose after the start of the COVID-19 pandemic are likely to cause problems for Amazon Prime Day this year.
Brielle Jaekel
June 21, 2021

Interstate Batteries implemented Roambee's real-time demand-signal solution to its 250-plus distributors and more than 250,000-plus dealer locations, upgrading its fulfillment logistics to a demand-based dynamic model.
Roambee
June 18, 2021

From the manufacturing facility to the warehouse to the store and to the end customer, mobile solutions can help companies control their operations in a more efficient and connected manner.
Panasonic
June 18, 2021

By maximizing the availability of data for your warehouse operation, you are empowered to make more informed decisions.
Dematic Corp.
June 11, 2021

The critical goal is helping supply chain personnel to bubble up changes in in real-time, understand their potential impact and then determine and execute appropriate remedial action. Contextual analytics can play a leading role in this challenge.
Yellowfin
June 10, 2021