Urban Development on the Rise in China 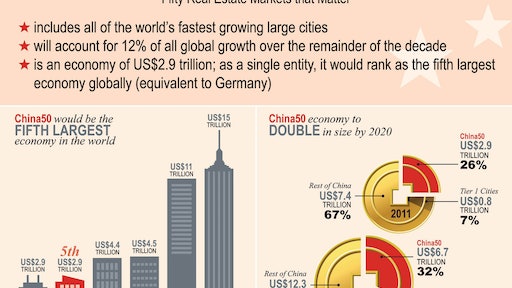 There is a huge gap in the logistics sector with a severe under-provision of international grade warehouse stock, according to Jones Lang LaSalle’s recent report “China50, Fifty Real Estate Markets That Matter.” China’s total modern logistics stock is barely equal to that of Boston in the United States. Long-term growth prospects for developers, manufacturers and third-party logistics providers will be further boosted by improving transport infrastructure, retail growth and a shift inland of China’s manufacturing base.

“China50” examines the country’s emerging business locations to identify the drivers that are shaping its city hierarchy.

The latest report describes and assesses how recent and future changes to China’s economic, business and policy landscape are impacting the dynamics of real estate markets across 50 of China’s most important secondary and tertiary cities. A total of 10 new cities have been added since the “China40” report in 2009. And nine cities—defined as Tier 1.5 Transitional Cities—stand out and include: Chengdu, Chongqing, Dalian, Hangzhou, Nanjing, Shenyang, Suzhou, Tianjin and Wuhan. They are fast-tracking to maturity and—as large diversified open economies—are creating depth across multiple real estate sectors.

These nine cities are beginning to create some distance from other China50 cities—including Tier 1 Core Cities, Tier 2 Growth Cities and Tier 3 Emerging Cities and Early Adopter Cities—as a result of their registered significant improvements in their economic and property scores during the past three years. All have benefited from massive infrastructure investment and are expected to see substantial increases in their commercial real estate stocks over the next two to three years.

Chengdu emerged as the premier China50 real estate market while Chongqing, Shenyang and Tianjin have built up the strongest momentum.

Jones Lang LaSalle predicts that retail will provide the greatest real estate opportunity in China50 and that significant opportunities will also exist in the logistics sector.

“The new China50 are being transformed at an unprecedented rate by the scale of building and by the progress of economic development,” explained KK Fung, Managing Director for Jones Lang LaSalle, Greater China. “They are the cities that we believe will be hitting the headlines over the next decade and that will provide opportunities beyond the familiar Tier I cities.”

But the logistics market remains largely untapped and significantly undersupplied. Across most of the China50, the sector is still at an early stage of evolution with low-quality logistics facilities and a dominance of local developers. And while a massive investment in transport infrastructure is taking place—including road, rail, air and waterway— it will take some time before the new infrastructure fully impacts the China50 logistics sector.

Nonetheless, significant opportunities do exist in the logistics sector where there is a severe under-provision of international grade stock. China’s total modern logistics stock is barely equally to that of Boston in the United States. Prospects for logistics will be further boosted by improving transport infrastructure, retail growth and a shift inland of China’s manufacturing base.

“These 50 cities combined are expected to account for 12 percent of overall global economic growth over the next decade and China50 contains all of the world’s ten fastest growing large cities, led by Chongqing, Tianjin and Chengdu,” said Michael Klibaner, Head of Research for Jones Lang LaSalle, China. “These numbers are a clear signal that China50 is one of the world’s most exciting real estate opportunities.”

The development of over 100 million square meters of commercial space over the next decade is bringing much needed high-quality stock to these 50 cities. The movement of developers deeper into China50 helps to support the expansion of domestic and international corporates, retailers and hotel operators across the China50, into Tier 3 cities as they tap into favorable demographics and seek ‘first mover’ advantage.

“As the volume of tradable property assets increases and transparency improves, institutional investor interest in commercial real estate in the China50 will increase,” added Fung. “Their focus will be on the retail sector, which provides the largest real estate opportunity, driven by strong growth in China50’s middle class population, which is expected to double to over 125 million by the middle of the decade.”

And while the China50 offers a compelling long-term growth story, Fung confirmed, the road to maturity is unlikely to be smooth and fears of excessive risk may lead to some caution in the property market over the short to medium term.

“They will not be immune from volatilities in the global economy but importantly, some China50 cities—such as Chongqing, Wuhan and Xi’an—may prove to be more resilient than most, underpinned by the structural growth of China’s domestic economy,” he concluded.

For the full report, visit www.joneslanglasalle.com/China50Cities.

When time is money, a bit of color can make a huge difference. From checklists to labels, Printronix Industrial Laser Printers are a game-changer.
September 21, 2022