Port of Oakland has welcomed its largest ship to have ever been at its port, container vessel MSC Anna on April 16. 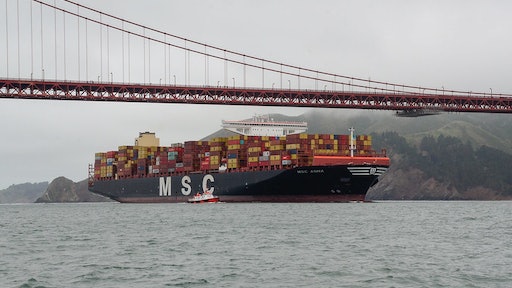 Port of Oakland is saying goodbye to the biggest ship ever to visit the city, adding that the 32-hour call of the MSC Anna has proceeded on schedule.

The 1,312-foot-long container vessel departs for Busan, South Korea, sometime after 9 p.m. from a berth in Oakland Estuary. The Liberian-registered megaship is loading and unloading 1,486 cargo containers in Oakland. The Port reports no problems with cargo transfers despite the unprecedented size of the MSC Anna.

“We’re not newcomers at this,” said Port of Oakland Maritime Director John Driscoll. “We work big ships every day, and the folks on the docks are proving once again that Oakland can handle them efficiently.”

With room for 19,200 20-foot boxes, the MSC Anna is one of the largest container ships ever in North America. Besides transporting cargo, the ship was dispatched to the West Coast to collect empty containers, the Port said. Shipping lines have hinted that MSC Anna-size ships may enter regular service here in the near future.

Before this week, the largest ship to call Oakland was the CMA Benjamin Franklin in 2016. That ship is 1,300-feet-long with a cargo capacity of 18,000 containers. The Port routinely handles the largest container ships in regular service to U.S. ports.

Port of Oakland Prepares for Recovery