A crewless cargo ship with zero-emissions is set to hit the seas in Norway. 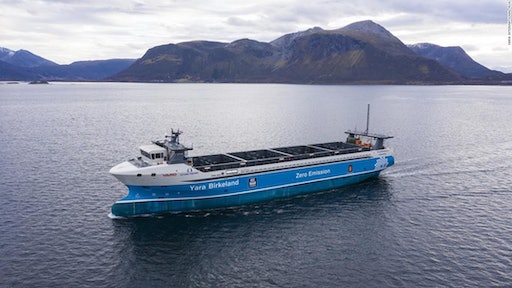 After numerous technological advances in the supply chain on the ground and in the warehouses push automation and sustainability, ocean liners now see innovations as well. Yara International plans to have the ship make a trip between two Norwegian towns by the end of the year, with no crew on board whatsoever, monitored from three onshore data control centers.

Click here to hear more about autonomous technology in the supply chain:

L.I.N.K. Educate | How Maritime Schooling Prepares Students for a Career in Ocean Freight

While parts of the United States feel the ease of COVID-19 restrictions the past year, Shanghai's strict lockdowns begin to cause chaos for more than just the supply chain.
Brielle Jaekel
April 28, 2022

New research shows that container prices fell as much as 30% throughout the past two months. Empties continue to gather in the U.S. as repatriating these containers back to Asia remains a struggle.
Container xChange
April 20, 2022

Windward looks to leverage artificial intelligence to drive visibility in ocean freight. The supply chain industry continues to flock to real-time data in logistics, but the maritime cargo is notoriously behind in this segment.
Windward
March 2, 2022

New research shows that ports in Asia are the next to see significant delays, while United States ports in January began to see reduction in congestion.
project44
February 22, 2022

Crew members of a ship transporting numerous luxury vehicles were forced to evacuate due to a severe fire. But the 650-foot-long ship remains burning in the middle of the Atlantic Ocean.
Brielle Jaekel
February 18, 2022

As San Pedro Bay Ports dealt with a harrowing last year with severe clogging, the government of California looks to new strategies to alleviate supply chain bottlenecks. It's latest plan is a partnership with a flexible warehousing platform.
Chunker
February 17, 2022

Port Congestion to Ease in First Half of 2022

As more ships arrive each day and delays mean some cargo won’t get unloaded until the following month, shifts in import patterns could be difficult to follow for the next few months.
National Retail Federation (NRF)
February 9, 2022

Carriers and logistics companies look for alternative methods of shipping during the supply chain crisis. Are they just band aids or a path to a new, sustainable future?
Brielle Jaekel
January 20, 2022
Follow Us