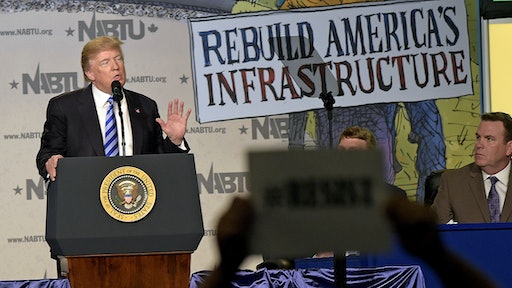 President Donald Trump's $200 billion plan to rebuild America was unveiled on Monday. the infrastructure program that Trump has promoted since his campaign is intended to attract a huge additional amount of money from states, localities and private investors. The goal of the plan is to raise $1.5 trillion to upgrade the country's highways, airports and railroads.

The ability to find the appropriate funding sources will be challenging for the project. Finding federal funds by saying they want to build better access to roads could get green lighted, especially if private investors are involved.

Proposals intend to serve more impoverished areas that require more state and local money, however. Financial investors may not see it as a big profit.

Trump's plan recasts the federal government as a minority stakeholder in the infrastructure plan. Half of the $200 billion promised over 10 years will be used as incentives for greater contributions from states, localities and private sectors. Trump also has hopes of speeding up the approval process.

Coming up with the $200 billion in federal funding will be difficult. Republicans have ballooned the deficit in last weeks spending agreement with their tax cuts, and Democrats are unlikely to go along with cuts that would offset Trump's plan.