Drones aren’t pragmatic just yet for last-mile delivery. But make no mistake, advancements are being made and it’s the way of the future. 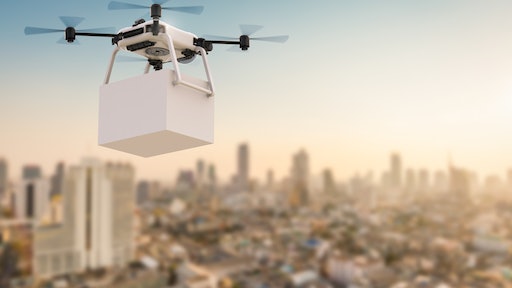 The future of last-mile shipping is through the air. Drones, once a futuristic pipedream, are on the horizon of delivering goods to consumers’ homes. The latest signal that autonomous delivery could soon be a logistics solution is the Federal Aviation Administration’s (FAA) approval of certain drones.

Shippers are increasingly interested in autonomous deliveries and drones, but the technology hasn’t caught up to demand yet. Shippers are prioritizing sustainability, and drones hold promise in reducing their carbon footprint. According to NTT Data’s 2023 Third Party Logistics Study, only 22% of shippers believe they are trailblazers when it comes to environmental, social and governance (ESG) efforts, and 12% don’t even have an ESG program.

Drones can empower sustainability across several aspects, from the hard costs of fossil fuel-burning automobiles to the softer costs associated with human intervention like lifting, loading and unloading, as well as route optimization once parcels start moving. Drones don’t have to worry about missing a turn on a highway or traffic and delays because they have a straight-line route every time.

It’s clear that drone technology works from its current military use. Drones and artificial intelligence have, reportedly, helped Ukraine’s counter-offensive. Weapons and combat zones are much different, however, than hovering 200 feet over someone’s house and carefully dropping ziplines, accounting for windage, to properly drop a package off on the front porch and not mistakenly down the chimney. The federal government is wading through applications, and the software that controls the drones needs to be approved just as the hardware does. Leading developers are building both in tandem.

For this multitude of reasons, drones aren’t pragmatic just yet for last-mile delivery. But make no mistake, advancements are being made and it’s the way of the future. Let’s find out more about which sectors are most interested in drones delivering products, what some current limitations are in expanding the use of drone delivery and how much delivery might cost.

The organizations looking to be first in line for drone delivery are in the retail, healthcare and pharmaceutical verticals. The technology could eventually offer benefits across all sectors, but for now they’re essentially divided up by weight class and the lightest loads are up first.

Delivering medicines autonomously has been the most successful early use case because the payload weight of a drone is limited. The most practical deliveries have maxed out around 7 pounds. This could also work for retailers looking to deliver smaller electronics, or pharmacies delivering prescriptions to patients that are either too sick or don’t have the means of leaving home.

Broader use cases aren’t feasible just yet. Let’s say you purchased something big, like a kayak or a piece of furniture. Even if an autonomous vehicle (albeit not a drone) gets that package to your doorstep, someone has to unload the truck. But if you’re looking to get a testing kit for a certain illness, you can get that fairly easily right at your front door and don’t have to risk getting anyone else sick if you’re contagious.

Other constraints in today’s landscape include mileage, the battery life of the drone to perform a round-trip route and entry into the market with testing sites and approvals.

Today’s test sites are somewhere between 3-7 miles from the point of origin because the drone needs to have enough power to make the trip out, including the weight of the cargo, and then return to the warehouse or distribution center. Solving this requires more innovation, and that’s where the government can help.

Federal agencies have done an admirable job getting us to this point, but can also help expedite some of the innovation needed. This is a bureaucratic issue, not a political one. Easier entry into the market creates more opportunities for new organizations to enter the field.

Test sites need to be rural for safety reasons so there are fewer potential conflicts in the airspace or even radio signal interference, but the process can be made more efficient in getting hardware and software combinations approved to begin testing.

Aside from sustainability, cost is one of the biggest factors driving interest in drone delivery. The last mile accounts for 53% of the total shipping equation, according to Insider Intelligence, and drones can help bring those costs down.

Initial testing has drone delivery in the range of $3 per order, with the potential to hit as low as 88 cents. Any shipper would be interested in a cost-competitive option like that, especially with the added bonus of reducing a carbon footprint and other sustainability benefits.

In order to get costs that low, you’d have to distribute from various points. With broader use and more entrants into the market, we can fuel the innovation necessary to create more competition and change the delivery landscape.

As companies learn from the supply chain crises, innovative technology solutions that use data-driven approaches to enhance visibility, insights and actions across the supply chain will continue to explode.
Hoptek, a Kearney company
October 23, 2022

Communication, consistency and control are the foundations of a successful delivery partnership that will improve customer satisfaction and create repeat customers.
PICKUP
October 18, 2022

Innovating Returns in the Last-Mile

Last-mile operators: if you can facilitate seamless returns for your retailer clients, those brands will reap the benefits, deepening your relationship and letting you earn your place as a true partner.
Veho
October 17, 2022

The last mile is the most inefficient leg of the logistics journey, but accounts for 53% of the overall costs. How can logistic companies conquer the last mile and overcome these challenges?
Anyline Inc.
October 5, 2022