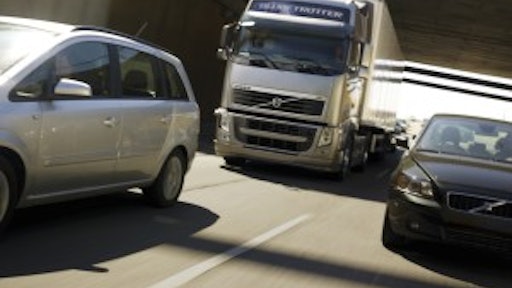 September 8, 2009 — Traffic safety is a top-priority area within the European Union. By getting vehicles to communicate with one another and using infrastructure in what is known as cooperative systems, it is possible to considerably increase safety levels, according to industry experts.

"We are already way ahead in the development of this technology," says Carl Johan Almqvist, traffic and product safety director at Volvo Trucks. "Communication between vehicles is no utopian dream."

From Science Fiction to Fact

Imagine sitting behind the wheel of a heavily loaded truck. You are driving on the motorway, a thick fog is beginning to descend and visibility is gradually getting worse. Suddenly you see a car stopped in front of you. You don't have a chance of braking — the poor visibility prevented you from seeing the traffic tailback before it was too late.

This scenario is not science fiction but something that will probably become reality. Within the framework of a comprehensive pan-European research project, called "Safespot," research is now being conducted into how cars and trucks can communicate with one another and how infrastructure can be developed in what is known as a cooperative system for increased traffic safety.

Between 1970 and 2000, traffic on Europe's roads increased threefold. Every year, about 40,000 people die on Europe's roads and about 1.7 million people are injured. Apart from the tragedies and human suffering involved, this also costs society enormous sums of money — about 160 billion euros. The EU regards traffic safety as one of the most important social issues on its agenda.

The Safespot project, which is partly financed by the EU, was started in 2006 and today encompasses 51 participants from 12 European countries. Many of the major European vehicle manufacturers are involved, as well as suppliers, universities and road administration authorities, among others. Research is conducted at six test centers in various parts of Europe, including in Dortmund, where Safespot's technical solutions undergo practical testing in urban conditions.

With new solutions in telematics — the integrated use of telecommunications and information — vehicles can be made increasingly intelligent. Many trucks, for instance, are already equipped with GPS for navigation, or camera-based systems for lane changing. What is unique about the Safespot project is that with the help of telematics, vehicles will now be able to communicate with each other in a system known as "vehicle-to-vehicle (V2V).

Moreover, it will also be possible for vehicles to communicate with the surrounding infrastructure (vehicle-to-infrastructure, or V2I) to create a driving support system that enhances active safety. "This will open the door to an entirely new generation of accident-prevention safety solutions," says Almqvist.

The Safespot project has defined and tested various applications. Firstly, applications that are based on the vehicle, such as safety at crossings, warning of an impending frontal collision, poor road conditions and alerting to the presence of cyclists or pedestrians. Secondly, infrastructure-based applications such as speed warning, information about accidents that have occurred and the creation of safety margins for emergency rescue vehicles. The driver receives this information via a display or sound/light signals in the vehicle. More than that, this information can also be transmitted via signs or flashing lights at the roadside.

The basis of Safespot's cooperative system is three innovative technologies: Accurate Cooperative Localization, Local Dynamic Maps and Ad-Hoc Communication Networking. "The aim is to pinpoint position with such precision that the margin of error is less than a meter," says Johan Fjellström, project manager for the Safespot sector that is handled by Volvo Technology, which among other things develops technical solutions for Volvo Trucks.

In order to achieve the required degree of precision, GPS data are used, along with information from the vehicle's sensors and knowledge about the exact location of various fixed points in the landscape such as lampposts and roads, obtained from the system's Local Dynamic Map (LDM). LDM is a centralized database and the very heart of the system. It integrates information from a regular digital map with layers of information gathered from other vehicles or from the infrastructure, which is an entirely new way of working.

"The idea is to give the driver advance notification of relevant information about what is happening on the road, based on data from the position and speed of other vehicles, the condition of the road and any obstacles up ahead," explains Fjellström. "In order for this to function safely, it is necessary to have reliable and quick communication in a local network. Safespot uses the standard for Car2Car — the IEEE 802.11p protocol and frequency 5.9 GHz."

The Safespot project's technical solutions are still at the research stage. Before the project concludes in 2010, much analysis remains to be carried out. At present it is impossible to say when cooperative systems will be fitted as standard in production vehicles, according to Fjellström.

"It is necessary to achieve a critical mass for this to be effective," he says. "Customers must also immediately benefit from the solutions. The cooperative system concept looks very promising and offers many significant benefits. The biggest of all is that the driver can receive information much earlier, even about events beyond the range of his or her own vision including things happening in other vehicles. This would be impossible without the various cooperative systems. What is more, a wide range of safety applications can be covered by one single system — something that would otherwise require many sensors of conventional type, such as radar."