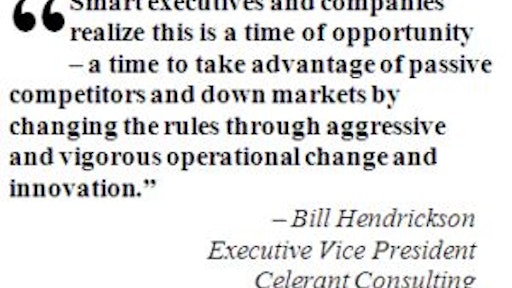 Lexington, MA — October 5, 2009 — More than half of global business executives (59 percent) in a recent survey said that the current economic crisis has revealed shortcomings in their organization that they are attempting to address, and two-thirds (66 percent) of participants said that their organization is using the crisis as an opportunity to drive change that would have been difficult to achieve in better times, according to a new report.

In the survey report, "The Burning Platform - How Companies Are Managing Change in a Recession," the Economist Intelligence Unit (EIU), which conducted the research, notes that during times of economic uncertainty it is commonplace for companies to attempt to simply weather the storm and not invest in organizational changes that will ultimately result in more efficient and effective business practices.

However, according to the survey of 561 senior executives across Europe and the U.S., sponsored by Celerant Consulting, only 6 percent of firms have suspended change programs — structured approaches to implementing and managing change within a company — as a result of the financial crisis, and the majority (60 percent) of firms are continuing with and even accelerating existing change programs while also launching new ones.

According to the report, budget cuts and staff headcount reductions remain the primary forms of change that have been implemented in the surveyed organizations since the onset of the global financial crisis, having been cited by 65 percent and 54 percent of the respondents, respectively. "These sorts of change can be implemented quickly and have an almost immediate impact
on liquidity," the EIU report noted. By contrast, 17 percent cited changes in their company's relationships with partners or suppliers, and just 9 percent cited changes in how their firm interacts with customers.

"Smart executives and companies realize this is a time of opportunity — a time to take advantage of passive competitors and down markets by changing the rules through aggressive and vigorous operational change and innovation," said Bill Hendrickson, executive vice president at Celerant Consulting. "There is a danger, however, that firms are using the crisis to launch change initiatives too rapidly, with too heavy a focus on short-term objectives."

Hendrickson added that those companies that can effectively implement a combination of long- and short-term change programs as well as engage employees' hearts and minds, ensure commitment from senior management and establish clearly defined objectives will be well positioned for growth as the current economic environment begins to improve.

How Can Success be Achieved?

The hardest part, according to the survey respondents, is "winning hearts and minds" (33 percent). Both this year and last, the survey respondents singled this out as the most difficult element of any change program. It is one thing to get people to state their commitment to a change initiative, but if they have not truly bought into the change, the program will ultimately fail.

Equally as tough a challenge for change programs, according to respondents, is keeping to budget and timetable (33 percent). As a result of the worsening economic conditions since last year's survey, this concern has escalated in importance, from ninth place in 2008 to second in 2009.

Additionally, the top reason change programs do not succeed is the lack of clearly defined or achievable milestones and objectives (reported by 29 percent of respondents). The second most commonly cited reason for failure is a lack of commitment from senior managers (19 percent). Last year's survey also cited these as the top two reasons for failure.

The full report, along with the survey results and industry-specific findings, is available via Celerant's Web site at http://www.celerantconsulting.com/Research/ChangeManagement/EIU.aspx.

Below, Robin Bew, the Economist Intelligence Unit's editorial director and chief economist, discusses prospects for the U.S. economy in 2010 and beyond in this interview released July 28, 2009. His prognosis in brief: Growth next year, followed by another slump in 2011.