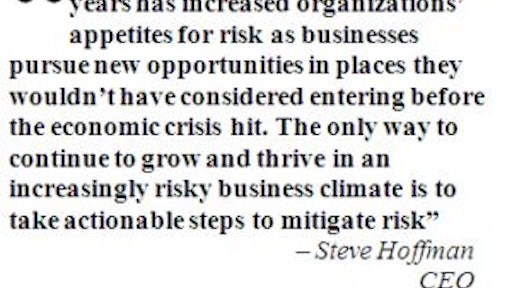 Annapolis, MD — January 12, 2010 — Many of the key risks to the supply chain that defined 2009 will remain in place through 2010, but the global economic slowdown will continue to present the greatest challenge to resuming normal business operations at home and abroad, according to a report released today by iJET Intelligent Risk Systems.

The major risks that captured headlines last year still present a threat to business, including piracy and shipping threats in the Gulf of Aden, drug violence in Mexico and the continued spread of the H1N1 virus, according to iJET, which provides global intelligence and business resiliency services.

However, the global recession is creating economic pressures that will continue to generate labor strikes, civil unrest and various forms of political extremism around the globe, the firm suggests.

In addition, iJET expects the emergence of risks unique to 2010. Hotly contested elections in Iraq, as well as several in Central and South America, Asia and elsewhere will likely instigate increased instability in those regions. In addition, the recent attempted terrorist attack on a Detroit-bound flight has refocused attention on Yemen and how longstanding instability in the Middle East can lead to wider disruptions in the region and beyond.

Two major sporting events — the Winter Olympics in Vancouver, Canada, and the World Cup in South Africa — will be the focus of major security efforts in 2010. In anticipation of these events, respective host nations are making significant investments in infrastructure and are implementing extensive security measures at key transportation hubs and tourist locations.

Other, unforeseeable events, including natural disasters and terrorist incidents, will continue to remain a threat to business operations. Additionally, according to iJET's CEO, Steve Hoffman, "The economic climate of the past few years has increased organizations' appetites for risk as businesses pursue new opportunities in places they wouldn't have considered entering before the economic crisis hit."

Hoffman noted that managing risks and preparing for the inevitable disruptions that will come from operating in unstable areas is a reality for global organizations today. "The only way to continue to grow and thrive in an increasingly risky business climate is to take actionable steps to mitigate risk," he said.

In light of the ongoing and increased risks to travelers, facilities and other business interests, iJET is recommending that organizations consider the following actions:

In this video, John Westerveld of Kinaxis discusses the essential characteristics of a supply chain risk management strategy. Posted January 15, 2009, by kinaxiskirsten.

Even though inflation has fallen, “it remains in the pipeline and is not going away."
National Retail Federation (NRF)
January 4, 2023
Follow Us