While it is still too early to see how much the executive order is actually impacting businesses and government agencies, new policies could strengthen the effects of rising prices and wage costs.​ 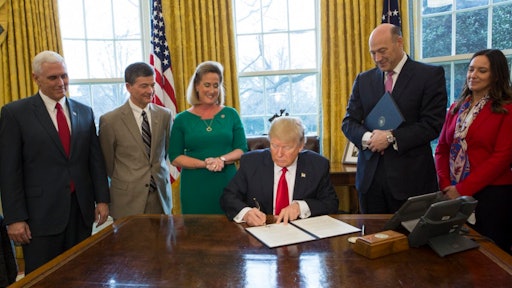 Cowboy hats, fire trucks and baseball bats. These were the products put on display at the White House during the newly proclaimed Made in America Week in July. While this was mainly a symbolic, PR-motivated show to celebrate American manufacturing, recent policy initiatives by President Donald Trump’s administration are aiming to reshape the supply chains of federal agencies and companies across many sectors.

In his first months in office, Trump signed a slew of executive orders intended to give domestic businesses an economic boost. These orders mainly scrapped regulations regarding hiring practices, carbon emissions and banking compliance. However, the headline announcement was April’s Buy American, Hire American executive order, which aims to tighten standards for federal procurement departments and companies that hire foreign workers.

There are two main directives in the order, as its title suggests. It directs all federal agencies to buy materials produced in the United States for all products used in daily operations or any federally funded projects, with a particular emphasis on iron, steel and manufactured goods. Regarding hiring, the order mandates a crackdown on H-1B visas specifically, which are popular temporary work visas, especially for tech companies. Overall, the goal is to funnel more taxpayer dollars back into US businesses and make it more burdensome for companies to hire non-US citizens. The resulting effect would mean a slimmer selection of suppliers for government procurement offices and a smaller labor pool for US companies.

It is important to note that laws commanding businesses to buy and hire American are by no means new. They date all the way back to Herbert Hoover’s Buy American Act of 1933. Even Barack Obama’s post-recession stimulus bill included a Buy American provision. A cap for foreign workers has existed long before Trump. Trump’s new initiatives are simply attempts to close all loopholes in existing laws that support domestic goods and workers. However, his rhetoric of economic nationalism is far more unabashed than that of past presidents, and he has slowly been implementing additional policies that reflect this, including withdrawing from the Trans-Pacific Partnership (TPP) and imposing tariffs on Canadian lumber.

Still, for all the provocative and embellished “America First” talk on the campaign trail, the real impetus for this policy has been the detrimental effects of increasing globalization on US workers. The symptoms of these effects have manifested through job loss and wage stagnation for laborers, as well as offshoring and tax evasion from corporations. While all of Trump’s executive orders thus far fail to address how automation has contributed to these problems, cracking down on procurement departments and work visas are two strategies that he has decided to use.

In closing these procurement loopholes, the two products mentioned by name in the executive order, iron and steel, will likely face the most scrutiny. If this executive order is followed by a big infrastructure spending bill, it could send demand for products made of these materials soaring. An increase in demand alongside a shrunken pool of potential suppliers would likely mean a spike in price for iron- and steel-based products made in the United States, such as nonelectric iron and steel wire and sheet metal. Additionally, common manufactured goods that have intense import competition could see a similar boost in price. This could be the case for products such as laptop and desktop computers, which, according to IBISWorld estimates, have been falling in price in the past three years at annualized rates of 4.3 and 4.5 percent, respectively.

The clampdown on H-1B visas would also have a noticeable effect on wages. Overwhelmingly, the vast majority of H-1B visas are given to computer systems engineers and programmers. Tech companies facing a labor shortage because of these regulations would be forced to raise wages to attract the best American engineers and programmers. Also, U.S. Citizen and Immigration Services (USCIS), which is in charge of visa allotments, may start approving H-1B visas to companies that are willing to pay higher wages. As labor costs rise for tech companies, the price of services will, too. In turn, services such as IT systems integration, software development and network planning and design, the prices of which have already been growing, will likely become even more expensive.

Backlash: Buy Whatever, Hire Whomever

Critics of this increased emphasis on US manufacturing and workers have several concerns. The first is that protectionist policies oftentimes increase the cost of doing business because US goods are typically more expensive, particularly due to high labor costs. For federal procurement departments to escape this buy American requirement, the product usually has to be more than 25% more expensive than its foreign counterpart. This in turn leaves a significant price window, wherein federal agencies are not spending their budget as efficiently as possible if the price of the domestic product does not exceed that threshold.

Another concern is from US businesses that get a significant source of their revenue from exporting. Ironically, these can often be the same companies the policy aims to help. The worry is that the US government’s domestic favoritism will trigger other countries to apply similar policies, thereby denting business for U.S. exporters. As a result, a trade war could erupt and become contagious across many different industries.

The other concern is for industries that rely heavily on skilled workers, such as the tech, education and medical sectors. These sectors worry about the “brain drain” phenomenon, which is an exodus of highly educated, highly skilled workers. Because of the regulations, top talent might start to gravitate elsewhere, leaving companies scrambling for prospects, in addition to dampening innovation.

Overall, it is still a bit early to see how much of the Buy American, Hire American order is actually affecting businesses and government agencies. Much of the order’s impact relies on how strictly the various bureaucratic agencies enforce the executive order, as the language leaves a lot of room for discretion. However, new policies could strengthen the effects of rising prices and wage costs. Given the pattern of protectionist tendencies seen in Trump’s first seven months in office and his recent public statements, it would not be surprising to see the administration roll out more immigration restrictions, new tariffs, increased subsidies or revamped trade deals.