Waypoint is launching its Kingpin module, which allows its AMRs to connect to a wide range of carts and automatically load and unload payloads. 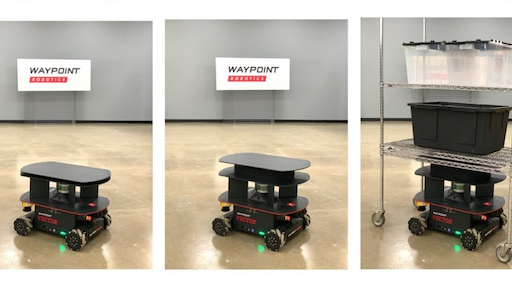 Waypoint Robotics is launching Kingpin, an automation top module that enables Waypoint’s industrial strength, omnidirectional AMRs to automatically load and unload payloads and connect to a variety of carts offering flexibility for material movement. Kingpin enables Vector to do two critical jobs with one simple top module, as opposed to having a dedicated fleet of lift deck robots for automatic load/unload, and another dedicated fleet of cart connecting robots for cart transport. With Kingpin, Vector can automatically pick up a tote on one side of the factory, deliver it to the other side of the factory, and then connect to a cart on the way back to the starting point. With Kingpin you get an AMR equipped to do both tasks – automatic loading and unloading, as well as the ability to connect to carts commonly used in factories and warehouses.

“Waypoint’s Kingpin is the first of its kind dual-purpose top module that enables Vector and MAV3K AMRs to automatically load and unload payloads as well as hitch onto carts of all sizes,” says Waypoint Robotics CEO, Jason Walker. “Now you don’t have to dedicate a robot for one task or another, with Kingpin you can do both.”

Waypoint’s Kingpin enables workers to have their Waypoint AMRs autonomously load and unload materials and/or autonomously connect to common carts in factories and warehouses, allowing them to focus more on work that matters and let the AMRs do all the heavy lifting.

Technology providers in the supply chain are hoping to power through the Coronavirus (COVID-19) pandemic and look beyond into 2021 with their strategies in upper management.
Brielle Jaekel
March 31, 2020

FOG Software Inc. has taken over ProShip Inc. from Quadient, but the latter will remain independent.
ProShip
March 30, 2020

Decision makers in the supply chain are becoming frustrated with out dated systems that they believe are costing these companies money, according to a report from Cleo and Dimensional Research.
Cleo
March 30, 2020

Tradeshift launched Tradeshift Engage, its seller engagement platform designed to build true digital collaboration between suppliers and buyers by delivering value on both sides from day one.
TRADESHIFT
March 27, 2020

The supply chain is focusing on technological advancements with new leaders and board members driving innovation.
Brielle Jaekel
March 27, 2020