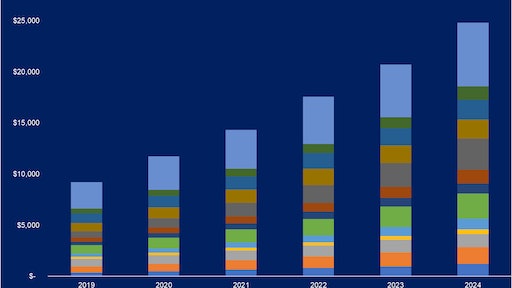 SmarTech Analysis, the leading provider of industry analysis and market forecasting data to the additive manufacturing industry, has released its fourth annual market study on the polymer additive manufacturing segment. In the report the firm quantifies the global economic impact of polymer 3D printing including, for the first time, a deep analysis of revenues associated with 3D printed parts. Driven in the long term by massive opportunities in direct AM production, SmarTech now expects polymer 3D printing to generate $11.7 billion in revenues in 2020, grow to $24 billion in 2024 and as much as $55 billion yearly by the end of this decade.

SmarTech Analysis, the leading provider of industry analysis and market forecasting data to the additive manufacturing industry, has released its fourth annual market study on Polymer Additive Manufacturing Markets. The report looks at the global economic impact of polymer 3D printing including, for the first time, a deep analysis of the opportunities presented by revenues associated with 3D printed parts. Driven in the long term by massive opportunities in direct AM production, SmarTech now expects polymer 3D printing to generate as much as $11.7 billion in 2020 including sales generated by polymer AM hardware and all associated material families.

The last two years saw the fulfillment of many promises in the industrialization of polymer additive manufacturing, as well as many challenges still left to face for the industry. Technologies continue to move forward in various ways—especially in terms of end-to-end workflow automation and optimization. Some of the most significant progress and accomplishments in polymer additive manufacturing markets have been registered in material science and development/optimization of new materials for current technologies.

Additive manufacturing’s value proposition is clearest within its applications. For this report SmarTech Analysis has developed a new model that takes into consideration multiple variable – including average part weight and cost – and data collected through the research conducted in several recent vertical segment reports focusing on automotive, aerospace and consumer products among others, in order to assess the revenues or revenue-equivalents of 3D printed parts – including prototypes, molds/casts, tools and directly 3D printed final parts.

In this report we present all the key revenues categories considered in this report. Hardware is divided into four main hardware families currently processing polymers (powder bed fusion, vat photopolymerization, material extrusion and material jetting). These include a breakdown of leading high-throughput polymer AM technologies such as digital light synthesis from Carbon, multijet fusion from HP as well as various hardware price-categories): these are now listed as separate segments in all hardware forecasts.

Materials subdivided by technology and form factors (powders, photopolymers, filaments and pellets). Parts are calculated as a complex function of material consumption and are subdivided into vertical adoption segments. The report provides a deep analysis into the full range of types of parts produced by AM, including prototypes and medical models, tools and molds/cast patterns, final and after-market parts and components. These are further broken down into specific applications and part-specific forecasts.

SmarTech expects polymer 3D-printed parts to grow into a $40 billion opportunity by 2030, at the end of the forecast period examined in this report. These numbers may appear unusual for additive manufacturing however, they are relatively small in the $12-to-$20 trillion global manufacturing industry. SmarTech expects that polymer 3D printing will continue to evolve into an advanced, serial manufacturing technology, for production of an increasing number of

Making the Virtual a Reality with Additive Manufacturing