Trump attacks Amazon on Twitter saying the company pays "little or no taxes." 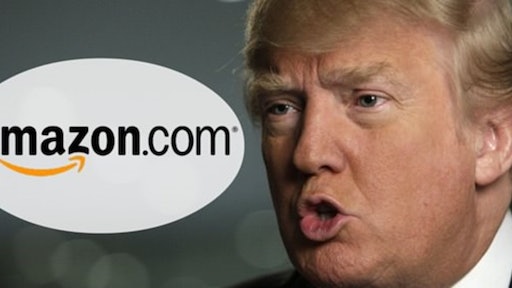 President Donald Trump lashed out at Amazon in a tweet saying the company pays "little to not taxes to state and local governments." After his viral comments, the company's stock slumped 4 percent. Trump claimed that he wants to "go after them."

I have stated my concerns with Amazon long before the Election. Unlike others, they pay little or no taxes to state & local governments, use our Postal System as their Delivery Boy (causing tremendous loss to the U.S.), and are putting many thousands of retailers out of business!

The Supreme Court will hear arguments whether all states can require online retailers to collect sales tax from consumers later this year.

Several states believe that online retailers should have to collect sales tax, even if the company doesn't have a physical presence in the area. In 1992, the Supreme Court ruled that states couldn't collect sales taxes gathered by mail-order catalog companies unless it had a physical presence in the state. However, in the era of Amazon, many are arguing that things have to change.

According to Wall Street analysts, Amazon does collect sales tax from consumers in 45 states and D.C.. It is possible that Trump could be referring to third-party sellers on the platform, which make up as much as 50 percent of Amazon's volume.

Trump has criticized Amazon in the past, saying that the company is hurting the retail industry and cutting jobs.

Amazon is doing great damage to tax paying retailers. Towns, cities and states throughout the U.S. are being hurt - many jobs being lost!

White house press secretary Sarah Huckabee told reporters that there were currently no plans or actions to push forward against Amazon.

Given that supply chains tend to be seen as a cost center for modern business, some might argue that technology investments weren’t a priority for the supply chain prior to the pandemic.
Qlik
July 29, 2022