The Little Ripper drone, known for spotting sharks, was able to assist in rescuing two men in Australia. 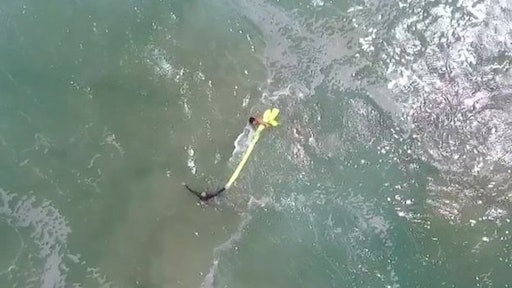 Australian lifeguards were testing a new drone when noted that two young men were caught in turbulent surf with 10-foot swells. Jai Sheridan, a lifeguard supervisor, instantly steered the drone toward the swimmers.

The drone was able to drop a rescue pod that inflates in the water. The swimmers were able to grab on and make their way to shore that way. Apart from fatigue, they were unharmed in the ordeal. The rescue took all of 70 seconds to complete.

In December, the state government of New South Wales, where the rescue took place, would invest 430,000 Australian dollars into drone technology, something that has already paid off.

“Never before has a drone, fitted with a flotation device, been used to rescue swimmers like this,” John Barilaro, deputy premier of New South Wales, said.