How Blockchain is Poised to Impact Supply Chains 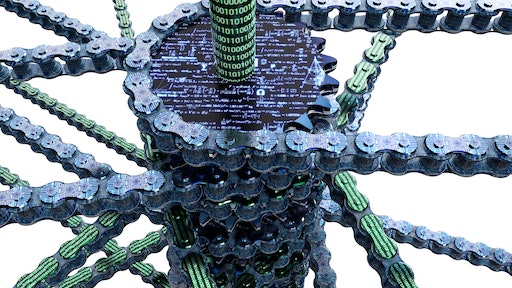 It is no secret that supply chains around the world are becoming increasingly digital. New technologies, such as the Internet of Things (IoT), 3-D printing and robotics, are fundamentally changing the way goods are produced and distributed, with new solutions popping up every day. Blockchain is already making waves in other industries, but so far, has arrived to supply chains with little fanfare.

Blockchain is the core system that underpins the cryptocurrency Bitcoin. It is a ledger of records structured in data groups called blocks, which use secure cryptographic validation to connect themselves together. Put simply, each block references and detects its predecessor by a hashing function, creating a continuous chain.

What makes this data chain noteworthy is that the ledger is not stored in any one master location or managed by any one body, but rather is distributed among numerous bodies. The data exists on multiple computers at the same time, allowing any vested entities to have access, with all parties sharing visibility of the records. Blockchain preserves old transactions forever and adds new ones to the chain permanently, ensuring everyone on the ledger’s network sees the same history as everyone else.

In a nutshell, a blockchain is a neutral, transparent and unalterable database living in multiple locations and shared by a community. Does this mean that Bitcoin is the global currency of the future for supply chain and trade payments? Most likely not, but the Blockchain concept can be applied to global supply chains to facilitate better, more efficient interactions.

International trade payments, tariffs and taxes depend upon exact, precise documentation. Specifically, when a document is created for an export and sent to a trade bank or government that exact same documentation format and ledger has to be used for the import portion. Any discrepancies allow the import bank to withhold payment until the issues are resolved. Though it usually is not more than a matter of days, when compounded by a massive amount of global imports and exports, the finance matter becomes extremely relevant.

One immediate benefit of operationalizing blockchain focuses on recent weight regulations, which require shippers to verify the actual gross mass of packed containers before they can be loaded onto a ship. Verified gross weight (VGW) is becoming a nuisance for many shippers as it drives up costs, and they struggle to adapt to the new requirements. When a shipment is weighed and entered once, the VGW is very difficult to manipulate by any further parties.

Blockchain is not widely understood yet by shippers and manufacturers, but it will be a great tool for complying with these new regulations by holding them responsible for misrepresenting the weight on a product. Through blockchain, weights can be logged first at the factory, then again by shippers at the beginning of a shipment and so on at each stop when items are loaded or unloaded. All parties on the chain see the same data, without the ability to alter it.

The impetus behind the VFW regulations is to enhance safety by controlling shipping weights. Implementing blockchain allows items to be added for verification without the possibility of data tampering in the chain by any invested parties, ultimately helping to optimize safety for shippers by holding all parties accountable. It is virtually impossible to “hack” a blockchain, because every block is dependent upon the previous block and verification of an added block is incentivized.

With Bitcoin, the first person to authenticate a block receives a small bitcoin payment, but this could also apply in the form of other currencies. To “hack” a chain, the hacker has to go back and change all of the verified blocks previous to theirs, and then change all of the blocks being added to the chain after theirs.

In the past, freight forwarders or other entities have manipulated shipping weights to pay smaller tariffs and lower shipping fees. Traditionally, those changes on paper documentation are difficult to find, but not through blockchain, where each party can see if an event does not correlate to an earlier event. Ultimately, it significantly assists in the identification of supply chain fraud.

The basic advantage of blockchain is that no single company has control. Questions of transparency and accountability between bodies whose interests are not necessarily mutual are quashed. With important data being updated in real time, the need for arduous, faulty reconciliation with each other’s internal records is removed. Each member of the network has far better visibility of the total activity.

In an industry dominated by an array of complicated regulations, maritime law and commercial codes, the supply chain is becoming increasingly reliant on digital technology to maintain successful operations. Secure technologies such as blockchain are sure to continue streamlining the channels of communication throughout the supply chain.