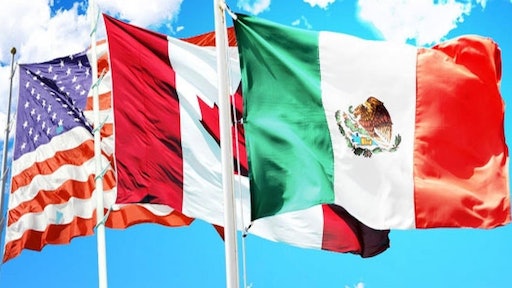 Despite making deals with Mexico, the United States is ready to move on with NAFTA negotiations with or without Canada.

There is still a significant amount of distance between the United States, Mexico and Canada. After signing an agreement with Mexico, the two countries were rushing to sign a deal before Mexican President Enrique Pena Nieto leaves office on Dec. 1, CNN reports. In order to meet that deadline, U.S. negotiators must send text of an agreement to congress by Sunday.

The United States is expected to submit text on Friday, and whether or not Canada is in on it is still up in the air. CNN reports that the country could be added later, however, Canada isn't budging on its dairy market.

Currently, Canada and Mexico are two of the United States' biggest trading partners. If one company didn't sign the deal, supply chains could unravel, CNN reports. If officials were to come to an agreement by Sunday, it would need to be approved by a new congress in January.

However, CNN reports that several members of congress have suggested that they would not sign a deal unless all there countries approved of it. A  bilateral deal with Mexico could be challenged and might not qualify for fast-track legislative procedure that a trilateral deal would.