For Vietnam, talk of a collapse of the Trans-Pacific Partnership trade pact is failing to dent confidence. 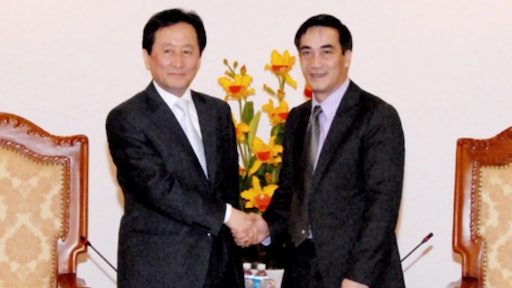 “With or without the TPP, our goal is to improve our investment environment,” Tran Xuan Ha (pictured on the right), a deputy finance minister, said in an interview in Hanoi.

Whether the Trans-Pacific Partnership (TPP)—a 12-nation preferential trade agreement that covers about 40 percent of the global economy—is approved by the U.S. Congress or not, authorities in Vietnam are forging ahead with plans to cut taxes and reduce red tape for businesses to make them more globally competitive.

“With or without the TPP, our goal is to improve our investment environment,” Tran Xuan Ha, a deputy finance minister, said in an interview in Hanoi. “With the TPP, our corporate sector will need to be even more competitive to ensure it retains market share.”

Vietnam is riding the wave of a foreign investor-led economic boom that’s seen the southeast Asian nation transform from mainly an exporter of agricultural commodities, such as rice and coffee, to a manufacturing hub. That’s a development path that’s unlikely to be reversed even if the TPP fails to take off, given the opposition to the accord by both U.S. presidential nominees, Donald Trump and Hillary Clinton.

“Vietnam stands to gain from the TPP, but so do many of the other countries, including the U.S.,” Sebastian Eckardt, lead economist for the World Bank in Vietnam, said in an interview in Hanoi. For Vietnam, “it’s an upside potential rather than a downside risk if it doesn’t come through.”