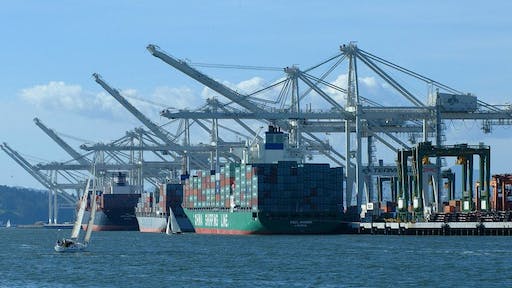 May 6, 2016—Ports along the West Coast handled their smallest share of container imports in March than at any point since last winter’s labor strife, reflecting slumping trade with China.

The ports, including the nation’s two busiest at Los Angeles and Long Beach, imported just 43.6 percent of containerized goods, down from about 50 percent in the previous few months, according to trade data analyzed by Beacon Economics.

A decline in Chinese trade hits ports on the West Coast harder than other regions, said Jock O’Connell, a trade economist with Beacon. China’s cooling economy, along with sluggish global growth, and persistent high inventories among U.S. retailers and manufacturers, have taken a toll on trans-Pacific trade. The drop was particularly steep in March because many Chinese factories closed for the Lunar New Year in February, reducing the flow of goods across the Pacific.

The total value of container imports from China to the U.S. in March was $16.9 billion, according to U.S. Commerce Department data, down from $25.1 billion the previous month and as much as $28.8 billion from last August—the most recent peak. The West Coast handled 78.6 percent of the $16.9 billion in container goods from China, on par with its usual share.