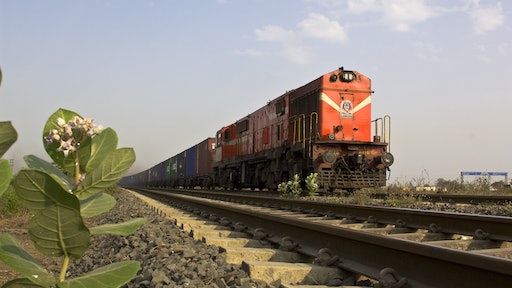 If India’s supply chain industry created a logo, some variation of a pause button may be fitting.

Although the country had various promising infrastructure improvement plans on its agenda for years, most are slow to come to fruition—if they progressed at all. In fact, if you compared snapshots of its roadways, railways, ports, airports and tax structure from five years ago with current versions of the same, your company may be hard-pressed to spot major differences.

But thanks to several recent developments, there’s every reason to believe that India’s extended transportation stasis may finally be coming to a close—and that this time, the forward momentum will be sustained.

Those of us who live in India would be the first to admit that, even though our total roadway network is the second largest in the world, quantity clearly doesn’t equal quality. Only 55 percent of the 4.8 million-kilometer road system is paved. In addition, the National Highway Network, which handles 40 percent of the country’s traffic, represents just 2 percent of the overall footprint—and most of its roads have two lanes or less.

This creates significant roadway congestion and severely limits average trucking speeds, which currently clock in at less than 13 kilometers per hour for a north-south/cross-country move. Velocity is further hampered by the need for drivers to stop, and pay tolls at one or more of the National Highway Network’s 350 toll booths.

The previous Indian government hoped to correct many of these drawbacks with the help of various initiatives and public-private partnerships that would enable it to add as much as 20 new kilometers of new highway a day. But due to hurdles associated with land acquisition, environmental clearances and such, only a fraction of the proposed additions were completed by the start of 2014.

Fast forward to now. When the current government came into power last May, it declared that improved mobility on Indian roads would be one of its top priorities. And thus far, it made good on that promise. Among other things, it introduced an electronic toll collection system, streamlined many of the systems and processes that were delaying the start of many national highway projects, and established the National Highways and Infrastructure Development Corporation.

Of course that doesn’t necessarily mean traveling on India’s roadways will ever be unchallenging, especially as manufacturing activity—and the transportation demands that go hand in hand with it—continue to increase. However, all of these things are indeed a step in the right direction.

Even more promising developments are occurring on the railways and they are much needed.

Although India’s rail system is one of the largest in the world, spanning nearly 64,000 route kilometers and 2.1 million freight cars, it’s also one of densest in terms of traffic. During 2012-2013 for example, it handled 8.7 billion passengers and 1 billion tons of cargo. In addition, certain corridors are especially strained; two-thirds of its freight currently travels over just 16 percent of its network—the four key routes connecting Delhi, Mumbai, Chennai and Kolkata that are also known as the Golden Quadrilateral. And much of the railway’s rolling stock is outdated or in poor condition.

As a result, congestion, bottlenecks and service volatility are common. And many shippers are reluctant to consider rail freight, which currently travels at an average of 25 kilometers per hour (and may actually get as low as 20 kilometers per hour), as a truly viable modal alternative.

To counteract these issues, India unveiled a comprehensive railway modernization plan approximately 10 years ago. Among other things, it introduced the prospect of connecting the country with six freight-only lines, created the Dedicated Freight Corridor Corporation of India (DFCCI) to oversee construction of these lines and opened up several aspects of rail ownership to private organizations.

Since that time, the longed-for modernization was subject to various ups and downs. Land acquisition was problematic. Private participation was lower than anticipated. And shifts in political power added their own substantial share of twists and turns. In fact, between 2006 and 20011, the rail system gained less than 10 percent of the 25,000 kilometers of new lines that were hoped for.

However, thanks to funding from organizations such as the World Bank and the Japan International Cooperation Agency, as well as the diligence of the DFCCI, construction is now well under way on two of the dedicated freight corridor’s (DFC’s) six lines, an eastern DFC that will run from Ludhiana to Kolkata and a western DFC that will run from Mumbai to Delhi. Once complete in the next few years, these additions will enable rail freight to travel at speeds of up to 100 kilometers per hour—and offer India’s rail shippers unprecedented levels of land transit velocity, reliability and sustainability.

Meanwhile, a 2010 automobile freight train operations (AFTO) policy—and a 2013 modification that made it more freight-friendly—made it possible for foreign-owned businesses to own and operate rail cars for automobile transport in India, a move that ultimately could make a higher caliber of equipment and new genres of rail service more readily available to shippers. In late 2014, APL Logistics VASCOR Automotive launched one such service with the maiden voyage of AutoLinx, India’s first long-haul, large-quantity rail service for automobiles. Now operating three rakes capable of carrying 300 vehicles apiece, AutoLinx garnered high levels of interest among many of India’s largest original equipment manufacturers (OEMs), many of whom are all too aware that the supply chain challenges created by the Indian automotive industry’s double-digit growth cannot be supported by road transportation solutions alone.

Indian rail professionals are hopeful that, over time, the presence of such an option will vastly increase the 3 to 4 percent of finished vehicles currently traveling through the country via rail. Those of us who are bullish on seeing India’s intermodal options thrive are equally hopeful that AutoLinx’s initial success will finally inspire many other companies to move forward with similar rail service initiatives of their own, especially since Indian Railway has come out with additional policies designed to encourage private-sector participation in railway expansion. These include policies for parcel transportation, specialized cargo such as iron and steel transportation, and the development of private freight terminals.

And then, there is the ongoing story of the Goods and Services Tax (GST).

While some companies decentralize their distribution center (DC) networks by choice, businesses operating in India often had to do it out of necessity thanks to the continued existence of the Central Sales Tax (CST), which must be paid every time inventory crosses state lines. This compelled most companies to engage in the less-than-efficient practice of establishing warehouses in every major Indian state in order to minimize their potential tax burden and minimize delays at tax-related inspection checkpoints.

While there was considerable talk for years about phasing out the CST and other indirect taxes in favor of a more shipper-friendly national GST, it thus far remained just that—talk.

Thankfully, India’s new Prime Minister Narendra Modi is widely known for his pro-business stance. And now that his new government, which won with a clear majority, is in place, many are optimistic that the latest proposed GST implementation date of spring 2016 could finally be the one that sticks.

Should the GST pass, it will free shippers to explore more efficient, consolidated, regional approaches to their product storage and distribution, and pave the way for them to explore a wide variety of more efficient product flows. It also would significantly abbreviate the time it takes for trucks to make a cross-country transit, eliminating the estimated five to seven hours they’re currently obliged to spend at tax-related checkpoints.

By sharing these views, I do not mean to imply that India’s land infrastructure is out of the supply chain woods. To paraphrase the popular poet Robert Frost, those woods are truly dark and deep—not to mention a long time in the making. And from a logistical perspective, India still clearly has many promises to keep.

Nevertheless, after years of having little to show for our country’s efforts besides promises or plans, it is encouraging to see tangible signs of progress. Our evolution may be slower than some hoped, but it is undoubtedly picking up steam.